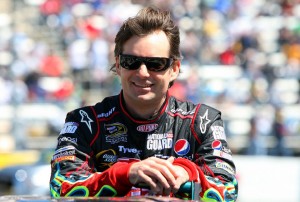 MARTINSVILLE, VA – MARCH 29: Jeff Gordon, driver of the #24 DuPont Chevrolet, stands in the bed of a truck during driver introductions prior to the start of the NASCAR Sprint Cup Series Goody’s Fast Pain Relief 500 at the Martinsville Speedway on March 29, 2009 in Martinsville, Virginia. (Photo by Jim McIsaac/Getty Images)