June 8 – – With Jeff Gordon struggling with handling issues during the second half of the Pocono 500, crew chief Steve Letarte elected to play the fuel strategy game. As it turned out, it nearly resulted in a victory.

Gordon started on the outside of the front row and rocketed to the lead before the field entered the first turn. The caution waved on lap 2 after Denny Hamlin stopped on the track. Gordon chose the outside line for the restart and once again beat his teammate into turn one. On lap 6, Johnson passed Gordon coming off turn one. Two laps later, Kurt Busch and Ryan Newman took positions and sent Gordon back to 4th.

Gordon struggled with handling as he was unable to get in the throttle coming off the corners. He dropped to 5th after Greg Biffle passed on lap 9. Gordon fell to 7th before the caution waved on lap 14. Pit stops ensued with Gordon departing in 13th place after a series of adjustments. The chassis changes seemed to pay immediate dividends as Gordon moved into the top-10 within one lap of the restart. By lap 20, he was up to 7th position. Gordon’s progress continued after passing Jeff Burton to take 6th on lap 23. However, he was unable to gain ground on the top-5 and remained in the 6th spot until a round of green flag pit stops on lap 45. Gordon moved up to 5th following the cycle of pit stops. He remained 5th through the next cycle of green flag stops on lap 75.

A debris caution on lap 103 during a cycle of pit stops brought the leaders to pit road. Gordon entered in 3rd place and held the position coming off of pit road. He restarted in 5th due to Carl Edwards and Jeff Burton pitting before the caution flag. However, he was hindered by the inside line and dropped to 9th within a lap of the restart. The caution waved on lap 113 after David Stremme hit the wall. Most of the leaders– including Gordon– elected to stay on the track. He fell from 8th to 12th on lap 118 after getting loose in turn three. On lap 121, he dropped another two positions. Kurt Busch passed on lap 122 to put Gordon back to 15th place. The handling problems continued as Gordon fell to 23rd on lap 127. He came to pit road a few laps early under green for chassis adjustments on lap 135. After the cycle of stops, he was up to 20th on lap 140.

With 50 laps to go, Gordon was in 18th and seemed to be making headway on getting a handle on the chassis issues — but time was running out in the race. A caution flag on lap 156 brought the field to pit road, but Gordon remained on the track with light rain falling. Crew chief Steve Letarte, who played the rain game and won in 2007, realized that staying on the track and hoping for a sudden shower was Gordon’s only chance at a victory. When the sun shined through, he was forced to give up the lead. Gordon restarted at the end of the line, but the silver lining was that he’d be able to make it to the finish without stopping for fuel if the race stayed green.

Gordon moved to 18th with 34 laps to go. Three laps later, he moved to 15th with a pass on Dale Earnhardt Jr. With 30 to go, he took 13th from Kyle Busch. With 15 laps to go, the leaders began pitting, which allowed Gordon to gain positions. He entered the top-10 on lap 186 while in fuel conservation mode with the throttle. On lap 190, Gordon was up to 6th as more leaders came to pit road for fuel. He finished in 4th after two drivers — including Jimmie Johnson — ran out of fuel on the final lap. At the front of the field, Tony Stewart scored his first victory as a car owner. It was the first victory for an owner/driver since Ricky Rudd scored a win in 1998, though Stewart’s car is technically owned by Margaret Haas, the wife of Stewart/Haas co-owner Gene Haas.

These links may not load until late Sunday evening when Jayski.com updates their site.

JEFF GORDON, NO. 24 DUPONT IMPALA SS, Finished 4th
HOW WOULD YOU DESCRIBE TODAY’S RACE WITH THE FUEL MILEAGE SCENARIO?
“We’ve seen it happen at a lot of races. This is a tough place to save so I am really impressed with those guys that finished ahead of us. I am really proud of Steve Letarte and this whole DuPont crew for what they did to get me out there in that position and be able to go all the way. You have to get the finishes any way you can. We never gave up. We were pretty good for a long time. That double-file restart there, boy I will tell you what, it killed us so we have got to work on that a little bit. Just aero-wise, my car was good in a single-file line and when we were in clean air. But whew, it was a handful there in all that dirty air. We got shuffled back there and it kind of worked to our favor. Tried to win it with the rain that didn’t work so fourth place, I am pretty excited about that.” 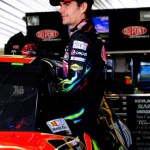 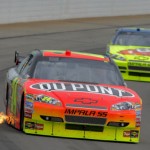 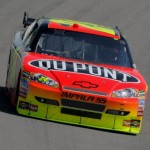 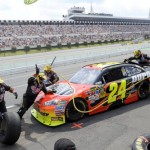 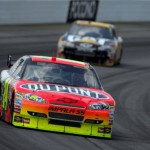