You are here: Home / Feature / Michigan In Car Audio

June 15 – – It wasn’t a victory for Jeff Gordon at Michigan Speedway, but after starting last to begin the day, he posted a solid top-5 finish. The overall lack of caution flags — there were only three in the race — forced the team to make adjustments on the fly.

Gordon started at the rear of the field due to an engine change on Friday. He gained three spots on the opening lap, and moved up to 32nd on lap 5. He picked off two more spots on lap 6, and another pair on lap 8 to run in the 28th position. His upward climb continued as he moved to 22nd on lap 16. Gordon entered the top-20 on lap 19 and moved up three more spots by lap 26. He moved up to 15th on lap 40 before a round of green flag pit stops. When the stops cycled through, Gordon ran in the 16th position.

A debris caution on lap 73 brought the field to pit road. Gordon restarted in 18th and gained four spots by lap 86. At the halfway point he ran in 13th, but was distantly behind race leader Jimmie Johnson. Gordon moved into the top-10 with a pass on Dale Earnhardt Jr on lap 110. A cycle of green flag pit stops ensued with Gordon holding onto the 10th spot. The second caution for debris came on lap 121. Gordon stayed on the track and moved to 8th on the restart. He took 6th from Tony Stewart on lap 133 as he closed in on the top-5. A caution for David Stremme’s crash on lap 152 slowed the field and set up pit stops. Gordon departed in the 5th position knowing that he would make it if the race went green until the finish.

He restarted in 5th on the inside line and immediately fell to 6th. He took the 5th position from Juan Pablo Montoya on lap 163. Gordon battled Denny Hamlin for position in the closing stages and took 4th place with 7 laps to go. At the front of the field, Johnson passed Greg Biffle for the lead with 5 laps to go, but ran out of fuel on the final lap. Gordon moved up to 3rd when he went around Johnson and then took 2nd when Biffle ran out of fuel on the backstrech. However, Gordon was several seconds behind race winner Mark Marin. The runner-up finish was Gordon’s best effort since his victory at Texas in early-April. 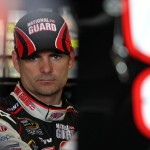 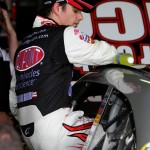 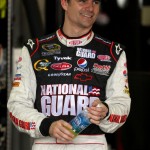 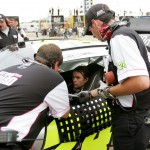 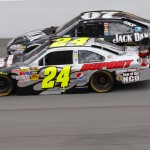 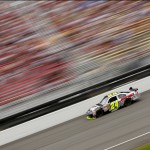 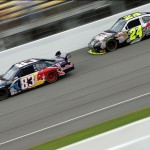 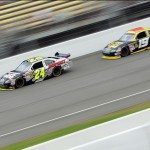 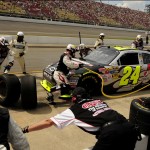