You are here: Home / Feature / Pocono II In Car Audio

August 3 – – Denny Hamlin led the most laps en route to his first Cup series victory since March 2008. Hamlin claimed the Pennsylvania 500 at Pocono Raceway after passing Clint Bowyer for the lead with 10 laps to go.  He kept a charging Juan Pablo Montoya at bay to win for the third time at Pocono.

Jeff Gordon’s day was an exercise in traffic-induced frustration.  He ran in the top-10 for the balance of the race, but a late four-tire change put him back in 15th place.  He battled door to door with Kurt Busch, Dale Earnhardt Jr, and Jimmie Johnson, among others, in the closing 20 laps.  Gordon finished the race in 8th as the handling on his car seemed at its best in the final run.

“It was a good car; definitely the best car we’ve had here in a while. I’m really excited about that and that we’ve been able to make those kinds of improvements. The strategy and the track position didn’t go our way today, so we ended up eighth. But it’s nice when you’re passing cars; good cars even toward the end of the race.”

HOW WAS THE RACING DIFFERENT AT POCONO WITH THE DOUBLE-FILE RESTARTS?
“I can’t even explain to you how insane it was out there. And when you get guys that have no tires that have stayed out, or two tires, against guys that have four tires, it just shakes it up so much because you’ve got such a speed difference and guys trying to hang on to position and guys fighting hard to get ’em and I mean it was just nuts. I saw so many guys rubbing, banging, smokin’ sideways, three-wide, four-wide, and I was right in the middle of it at times as well. It’s not the most fun, but when you make it out of it, you’re like whew, and you know it’s awesome racing to watch on TV and from the grandstands.”

JIMMIE JOHNSON WAS THREE LAPS DOWN AND MANAGED TO COME BACK AND FINISH 13TH. WAS THERE A TIME WHEN YOU GUYS WERE RACING FOR POSITION WHEN YOU WONDERED IS THIS GUY ON THE LEAD LAP?
“Right there at the end I knew he was back on the lead lap and I wasn’t expecting him to pass me, that’s for sure. But you know, these guys, you can never count them out and that’s what makes them a championship caliber team and Jimmie’s a great driver. So, it’s unfortunate that they had a car that was probably capable of winning, or at least battling up there for the win, that it kind of took them out of it there. But they fought back and still had a pretty decent day out of it.”

YOU ARE SOLID WITH FIVE RACES LEFT GOING INTO THE CHASE, DO YOU SAY YOU’RE GOING TO BE MORE AGGRESSIVE THAN YOU TYPICALLY WOULD BE?
“Yeah, I was being aggressive. The set-up was a little bit more aggressive for us, which paid off. Steve Letarte was real aggressive on the pit strategy. He probably is going to beat himself up a little bit over that last one, but all day long we were pitting early and taking two tires, and doing the things we needed to do to get ourselves in position to win. And there at the end, you can’t always factor in guys that are going to be on pit road when the caution comes out. And that cost us probably another three or four positions.” 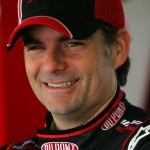 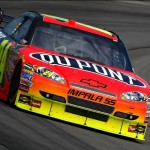 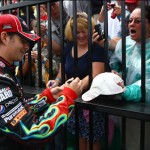 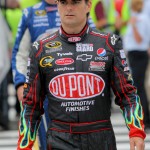 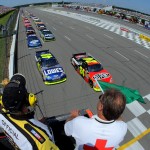 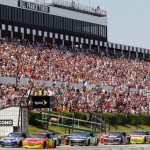 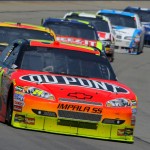