You are here: Home / Feature / Watkins Glen In Car Audio

August 10 – – The rain-delayed HelluvaGood at the Glen was a day of ups and downs — well, mostly downs — for Jeff Gordon.  Before the race, Gordon took the blame for a poor qualifying effort, yielding a 31st place start.  The team’s goals for the day were to have fun and play strategy to gain track position, hoping for a lucky caution.

Gordon clawed his way through heavy traffic and took advantage of an excellent first pit stop to reach 16th place by lap 22.  On lap 23, the David Stremme’s talent evaporation resulted in a spun in the inner loop, damaging Gordon’s and Kevin Harvick’s cars and forcing an extra pit stop.

Gordon once again chewed his way from 31st to 20th at lap 41 when Dale Earnhardt Jr. crashed, but couldn’t move his damaged car forward.  On lap 62, Sam Hornish ricocheted off the inside barrier in turn 9 after contact with Kasey Kahne and helicoptered into Gordon’s car, slamming it into the barrier in a head-on crash that ended Gordon’s day.  Gordon exited under his own power and was saddled with his first DNF of the season with a 37th place finish.

At the front of the field, Tony Stewart held Marcos Ambrose at bay to win his 5th career race at Watkins Glen — the most of any driver.  Stewart expanded his points lead to more than 250 points on Jimmie Johnson, and more than 340 points on Jeff Gordon.  Maybe there is some silver lining in the Chase system after all. 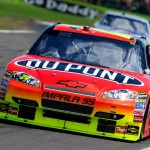 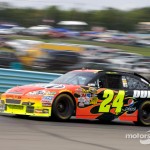 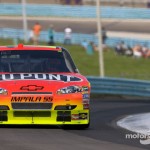 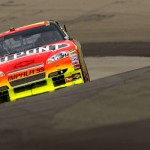 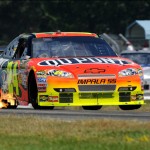 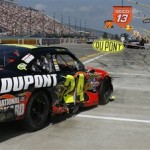 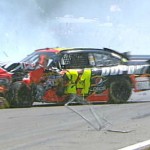 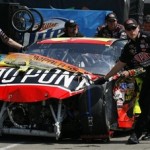 “It wasn’t that hard of a hit its just my back can’t stand too many hits. I really was concerned for Sam (Hornish). He took a heavy hit into the wall, a heavy hit by me and Jeff Burton. I saw him go off into the grass and I knew he was going to come out in front of me and I was just hoping to squeeze by and didn’t make it. It just made a rough weekend for the DuPont Chevrolet even worse. Now we just leave here and focus on Michigan.”

HOW DO YOU FEEL RIGHT NOW?

“I’m hurting. Everything feels good except my lower back where I’ve already had issues. It will just take a couple of weeks for it to heal. By then we’ll go to Bristol and get through that then we’ll be alright.”

WHEN YOU KNEW YOU WERE GOING TO HIT HIM, DO YOU BRACE DOWN OR RELAX?

“The first thing I was trying to do was make it by him. Actually I sped up a little bit. I saw him slide off there and I was trying to get off the corner as fast as I could to get by before he got out there but as soon as I saw him and bounce out I knew I was going to hit him. I just braced myself and got on the brakes and waited for the impact.”

HOW IS YOUR BACK? ARE YOU OKAY?

“It’s just not what I needed you know. You take three or four steps forward up to this point, and you take a hit like that and you take a couple steps backwards. So yeah, it was a heavy impact. I’m just glad Sam (Hornish) is all right. I saw him get wide there off the carousel and I knew he was going to hit the tire barrier and ricochet off and I was just hoping I’d get by him before he got out to me and man, I nailed him and spun him around like a top and my car just came to a halt and it really took a toll on my back again. So I hate that, but I was real proud of this DuPont Chevrolet team. We didn’t have a great weekend going and the car wasn’t perfect, but we were playing out the strategy and got caught up in that first incident. It’s just one of those days. But we were going to ride it out and make something out of it. I think Steve Letarte had some tricks up his sleeve with the pit strategy. Just wrong place, wrong time.”

WHAT WILL YOU HAVE TO DO THIS WEEK TO GET READY FOR MICHIGAN NEXT WEEK WITH YOUR BACK?

“Oh, Michigan is pretty easy. If we were going to Bristol next week, I’d be concerned. So we’ve got a couple of weeks to hopefully heal. We went through this at Dover when I hit at Dover and hurt my back as well. Every time I hit something it takes a toll on my back, but it seems to recover. But when you’re braking that hard it’s already pretty tight and then you hit like that and it spasms a bit. But we’ll be all right. Rough hit really for Sam. I saw him get taken wide there off the carousel and once I saw him starting to go around I knew he was going to get the outside wall and I kind of knew with what we saw with Jason Lefler in the Nationwide race. I was just trying to pick where to go. I don’t know if there is any safe place to go from where I was sitting. I just nailed him. I tried to squeeze by him on the outside and there was just no way. Nailed him and spun him around like a top. It took a toll on my back. Nothing else hurts, everything else is good. It’s jsut the back. Then I got into the outside wall the other side and was just sitting there in the track hoping nobody was going to hit me again.”

ITS BEEN A TOUGH WEEKEND FOR YOU.

“Sure. The only saving grace is that there are no road courses in the Chase. You want the bonus points. You want a good run. You want momentum. We just haven’t been good here in quite some time. I think our car was actually decent today we just didn’t qualify good enough to show for it. We moved up quite a few spots which is already tough to do on a road course. You don’t see anybody passing unless they’ve got fresh tires out there. I got caught up in that first incident and that really messed up our strategy. We were making some ground up until that happened. I’m proud of the guys. We made improvements as the weekend went on. We’ll just have to wait until the next time we come back here to show just how many improvements we really made?”

“Oh man, my left side and my back is super sore. It’s going to take probably a couple of weeks for it to heal completely and then we’ll be back to new. This happened at Dover when I hit the wall in Dover it was similar. This is a little bit different angle and it’s hurting. Luckily we’ve got Michigan coming up next weekend. It’s pretty easy on things.”

“Well first reacation is man that hurt and then you hope you don’t get hit again. I was just bracing myself. I saw cars that were still coming by pretty fast. As long as the car wasn’t on fire I was good to sit in there until everybody went by. Then I just wanted to get out and see what kind of pain I was in with my back. I knew I was hurting and then was wondering is Sam (Hornish) was okay because he took a couple of heavy hits there. I saw Jeff Burton was in it too so just making sure everybody was alright and then get back here and go home.”

HOW MUCH DO YOU PROTECT YOUR BACK NOW? “There’s nothing you can do. You got to get out there and you’ve got to just hope you don’t get into situations. It’s not life-threatening or anything its just painful. I’ve had MRI’s and everything else after these things and everything looks fine. It’s just some spasms that go on. You’ve just got to calm that down but it doesn’t just calm down by itself in a day. It really does take a couple of weeks.”