September 27 – – Jimmie Johnson mastered the Monster Mile with a sweep of the Cup Series races at Dover International Speedway in 2009. Johnson led the most laps en route to the victory in the AAA 400. He closed to within 10 points of Mark Martin for the series points lead as he tries for an unprecedented fourth consecutive championship.

Jeff Gordon’s day was an exercise in frustration as he appeared on the way to a runner-up finish.  However, a pit road problem in the closing stages pushed him back in traffic, before he rallied to finish a distant 6th.  He moved from 10th to 8th in the series standings, but trails Martin by 122 points with just 8 races remaining.

The race was marred by a spectacular crash on lap 32. Several cars slowed entering the corner.  Joey Logano checked up after Kasey Kahne slowed, which brought Tony Stewart into the rear of Logano’s car.  The rookie driver spun down the track, then back up and was hit again by Reed Sorenson, which sent Logano barrel-rolling down the track.  The wreck also collected Robby Gordon and Martin Truex Jr. and required a nearly 24-minute red flag for cleanup.

Johnson lost the top spot briefly to Kurt Busch during the first half of the event, but took firm control before the halfway mark.  Johnson won all races off of pit road — the advantage of having the first stall — and coasted to the victory ahead of Martin. 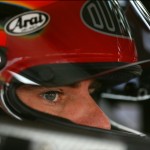 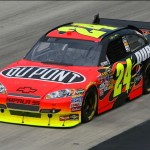 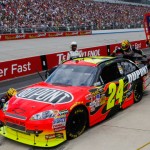 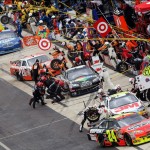 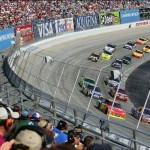 “I’m really disappointed.   I feel like we had a second-place car and when you have a second-place car you’ve got to finish second or contend for the win.  We had a problem with a gun on pit road and I don’t know what you do about that but we’ll try to fix it for the next time.  It’s just nice to run good.  The No. 48 was in a league of their own but I felt like we were second best.”

WAS THE LAST RUN INDICATIVE OF HOW DIFFICULT IT WAS IN TRAFFIC TO PASS?
“I already knew that earlier in the race.  It was very challenging.  It was like driving a different race car when you get fifth or sixth on back.  We had already made adjustments to the car to be up front like we had been.  You take that risk when you adjust the car.  We were trying to make it better and compete with the No. 48 and then you get behind, I think we were seventh, eighth or ninth or something like that.  We were just a sitting duck.  We couldn’t go anywhere.”

A SIXTH-PLACE COULD HAVE BEEN WORSE AFTER SEEING THAT SCARY WRECK AT THE BEGINNING.
“It certainly was an improvement over last week.  It can always be worse.  You have to remind yourself of that but right now I don’t want to remind myself of that.  I will tomorrow or the next day but right now I’m just disappointed.  We just can’t get things to go our way.  That’s what it takes to win a championship.  We’re certainly not out of it yet and we’re going to keep fighting hard like we did today and like we did last week.  We’re eighth in points and we’ll just keep on going.  I think the next two tracks are really good tracks for us so I’m looking forward to those.”

WHAT CAN YOU DO TO CHANGE THAT AND MAKE IT CLICK, IS A LITTLE BIT OF LUCK AS WELL?
“I believe you make your own luck.  Putting yourself in position, communication, preparation and just hard work.  I don’t know what happened to the gun.  We’ve got to find out why that happened and we’ll try to fix that for next week.”

YOU PICKED UP TWO SPOTS IN THE STANDINGS BUT YOU ARE STILL 122 POINTS OUT, IS THAT INDICATIVE OF HOW TOUGH THIS CHAMPIONSHIP IS?
“Certainly.  We saw Mark Martin win and finish second here and he’s tough.  Jimmie Johnson dominated today and finished fourth last week.  I think a lot of people thought that Hendrick Motorsports could be the team to beat and right now they certainly are.  We’re racing them plus other guys.  We’ve got work to do.  That’s part one.”

HOW PHYSICALLY TOUGH WAS TODAY’S RACE?
“It was pretty tough.  To me this tire was not as sketchy as the ones we’ve had during the past but it was certainly different the way it picked up rubber under the cautions.  It really made the restarts challenging to get grip and then the double-file restarts made it a challenge as well.  I’m surprised we didn’t see an outside groove really materialize like we have in the past.  This tire turns good and has pretty good grip so it allows you to run around the bottom a lot more.  I don’t know that might be something to think about for the next time.  It certainly worked good for Jimmie.”