October 12 – – Jimmie Johnson led the most laps en route to the victory in the Pepsi 500 at California Speedway.  It was Johnson’s 45th career win and gives him the points lead in the Chase for the first time.  Jeff Gordon finished 2nd after briefly challenging Johnson for the lead during several late-race restarts.   Gordon moved up to 5th in points, but still trails Johnson by more than 100.

Gordon started 10th and used the outside line to his advantage on the opening lap to move up to 8th.  By lap 8, he gained two more spots and ran in 6th place.  Gordon moved into the top-5 on lap 21 with a pass on Greg Biffle coming off turn four.   He brushed the wall on lap 30, before coming in for a green flag pit stop 10 laps later.

Gordon ran 4th when the pit stop sequence cycled through.  However, he lost the position to Denny Hamlin before the 50-lap mark.  As the run progressed, Gordon re-assumed the 4th spot from Hamlin.   The first caution came at lap 65 for Jamie McMurray’s cut tire.  Gordon came onto pit road in 4th held the position.  He dropped back on the restart before rallying back to 3rd on lap 75. Two laps later, Jimmie Johnson passed to send Gordon back to 4th.   On lap 79, he dropped to 5th, and slipped to 6th after Kevin Harvick went by on lap 81.  A caution for Ryan Newman’s cut tire brought the field to pit road on lap 84.  Gordon lost two spots on pit road and departed in 8th position.

On the restart, Montoya and Hamlin made contact with Hamlin hitting the inside wall and sending him to the garage.   Gordon moved to 4th with 54 laps to go, but ran distantly behind Johnson and Montoya.  Gordon took 3rd from Martin on lap 215, before pitting under green with 25 laps to go.  Gordon ran 2nd to Johnson after the pit stop sequence cycled through.  A debris caution with 15 laps to go slowed the field and set up a restart with Johnson and Gordon alongside each other.  Gordon started on the inside and took the lead on the backstretch.  Greg Biffle and Kasey Kahne spun on the frontstretch, bringing out the caution with 11 laps to go.  The restart came with 7 laps to go with Gordon on the outside.  Johnson took the lead from his teammate coming off turn four before a wreck in turn 1 collected six cars, including Jeff Burton, AJ Allmendinger, Marcos Ambrose, Reed Sorensen, Kasey Kahne, and Dale Earnhardt Jr.  The final restart came with 3 laps to go with Johnson pulling away from Gordon for his 45th career victory.  Gordon’s 2nd place effort was his 8th runner-up finish of the season. 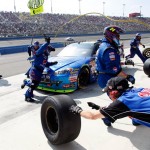 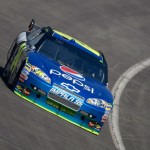 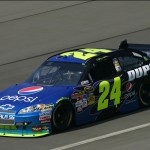 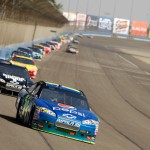 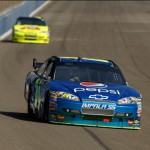 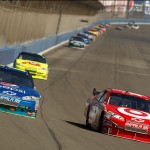