You are here: Home / Feature / Charlotte II In Car Audio

October 18 – – Jimmie Johnson dominated the weekend at Lowes Motor Speedway en route to the victory.  He led every practice session, captured the pole position, and scored his 3rd win in his last 4 races.  Johnson opened a 90-point lead over Mark Martin, and a 135-point lead over Jeff Gordon as he is firmly in command toward an unprecedented fourth straight championship.

Gordon started 9th and fell to 13th before the first caution for Sam Hornish’s spin on lap 3.  He slipped back to 15th on lap 10, just before Hornish’s second spin of the night.  He held 15th until a caution period for rain on lap 35.  Gordon gained two spots on pit road and restarted in 13th place on lap 44.  He took 11th from David Ragan on lap 50 as the handling began coming in.  Four laps later, he took 9th from Ryan Newman with a pass coming off turn four.  Newman re-assumed the 9th spot on lap 83, as Clint Bowyer also took a position from Gordon sending him back to 11th.

Green flag pit stops came at lap 95 with Gordon taking four tires.  He fell back to 13th battling handling issues in race traffic.  A caution for Kyle Busch’s spin in turn four slowed the field on lap 119.  Gordon changed two tires and departed pit road with the lead.  Gordon led the field thru the next caution period when Juan Pablo Montoya spun on lap 164.  Gordon opted for four tires and fell to 2nd after Denny Hamlin won the race off of pit road.  Gordon took the lead from Hamlin within a lap of the restart, and led until a debris caution on lap 189.  Gordon lost two spots on pit road after taking two tires and restarted behind Matt Kenseth and Jimmie Johnson.  Gordon fell back on the restart and dropped to 4th on lap 204 after Kasey Kahne passed.  He fell to 5th on lap 243 when Bowyer passed.

Gordon came in for a four-tire pit stop under he green flag on lap 246, and ran in 5th when the stops cycled through the field.  On lap 285, he pulled to the inside on the backstretch and let Kurt Busch and Joey Logano pass, which dropped him to 7th place.  Max Papis’ blown engine on lap 291 brought the caution flag out, and the lead lap cars came to pit road.  Gordon opted for two tires and departed in 3rd place.  He passed Kahne on the restart before a caution flag for Carl Edwards’ blown engine.  That allowed Gordon to line up alongside Johnson for the restart with 18 laps to go.  Gordon took the lead with 15 laps to go, but lost the top spot to Johnson two laps later.  Gordon then fell to 4th with 10 to go.  He held off Joey Logano on the final lap to finish in 4th.   Johnson pulled away for his 3rd win in the last 4 races.  Simply unstoppable X4. 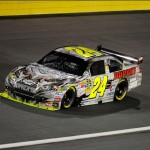 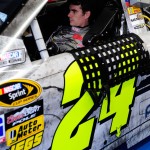 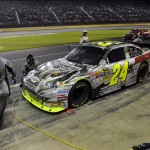 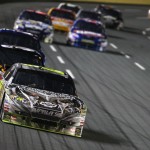 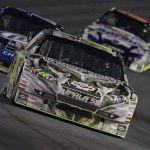 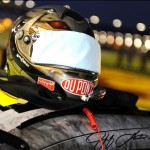