You are here: Home / Feature / Texas In Car Audio

November 9 – – If Jeff Gordon falls a few points short of the NASCAR championship, he’ll likely point to Texas as the deciding factor.  After Jimmie Johnson’s early crash opened a window of opportunity for Gordon to trim the points deficit, he struggled to a 13th place finish and still trails by 112 points.  Had Gordon scored the victory, the deficit would have been just 46 points.  Nevertheless, there are still two races — and more than 700 miles of racing– to go in the season.

Gordon started on the pole and led the opening laps.  On lap 3, Jimmie Johnson spun on the backstretch after contact from Sam Hornish and drilled the inside wall.  Johnson sustained heavy front and rear end damage on the Lowes Chevrolet and brought his car to the garage for extended repairs.  Gordon led until lap 13 when his car became loose in the corners.  Kurt Busch took the lead one lap later.  Kyle Busch took the runner-up spot on lap 19.   As the action progressed on the track, Jeff Gordon’s car chief Jason Burdett went to the garage area to help with repairs on Johnson’s car.

Gordon fell to 5th on lap 40 after Tony Stewart passed. Gordon came to pit road for a green flag pit stop on lap 55.  Crew chief Steve Letarte opted for track bar and air pressure adjustments to tighten the car up in the corners.  A slow pit stop hindered Gordon as he ran 11th after the stop.  On lap 88, Sam Hornish lost control and hit the inside wall on the backstretch to bring out the caution flag.  Gordon came to pit road for tires and a track bar adjustment.  He gained two spots and restarted in 9th place.   Juan Pablo Montoya passed Gordon on lap 99, putting him back in 10th spot.  On lap 116, Johnson returned to the track in a rebuilt car to gain points.  However, Gordon continued to struggle with the handling and dropped to 14th on lap 125. Gordon came to pit road for adjustments on lap 146 under the green flag.  After the pit stop sequence, Gordon ran in 16th.  A debris caution on lap 167 saved Gordon from going a lap down.

A wreck on lap 175 collected Carl Edwards and Montoya.  Gordon spun in turn two but luckily did not hit anything.  He came to pit road for tires and for repairs on the splitter brace.  He muddled around in 18th position before the next caution on lap 205.  Gordon went a lap down with 29 laps to go as the handling didn’t improve under the lights. 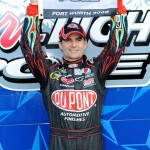 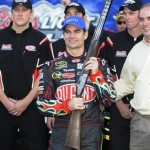 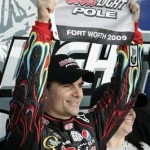 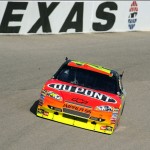 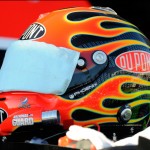 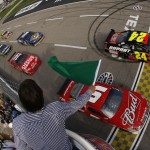 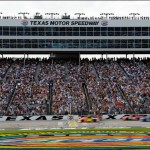 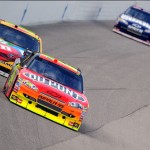 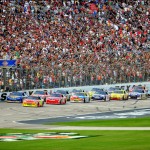 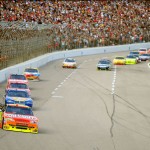