You are here: Home / Feature / Gatorade Duel In Car Audio

February 11 – – For the second time in the last four years, Jeff Gordon will start the Daytona 500 from the rear of the field.  In 2007, he was disqualified after winning the Gatorade Duel and started 42nd.  This time around he was collected in a chain reaction crash in the Gatorade Duel.  Gordon finished the event in 10th place, but sustained damage to the front and right side of the DuPont Chevrolet after an incident with 7 laps to go triggered by Michael Waltrip’s spin.   Gordon started 5th and received pushes from Greg Biffle and Kyle Busch to take the race lead on two occasions.  However, on lap 40, he fell out of the draft and slipped back to 9th.   He was running 14th when Waltrip spun coming off turn 4.   Regan Smith slowed directly in front of Gordon, who drilled the rear of Smith’s car.   Gordon then brushed the wall with the right side of the car.   He came to pit road for repairs and was able to draft up to 10th place at the finish.   On the final lap, Jimmie Johnson got a drafting push from Kyle Busch to take the victory. 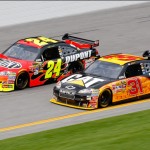 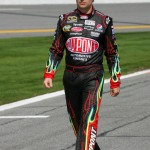 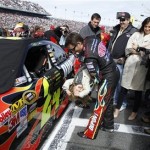 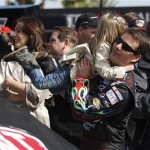 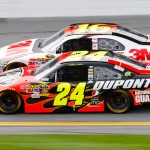 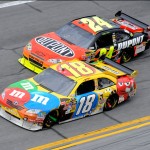