April 25 – – Jeff Gordon and Jimmie Johnson did their best to throw ice water on what many viewed as a simmering fued after the race at Texas Motor Speedway. Unfortunately, that ice water quickly heated back to a boil as the drivers found each other on the track at an inopportune time at Talladega Superspeedway. Gordon was forced onto the apron with 7 laps to go by Johnson, and was then swept up in a wreck. Gordon finished the event in 22nd place. “The 48 is testing my patience,” said Gordon, in reference to his teammate. “It takes a lot to make me mad and I am pissed right now.” At the front of the field, Kevin Harvick passed Jamie McMurray in the tri-oval on the final lap to win his 12th career race.

Gordon started 5th and stayed on the inside line at the outset. He fell back to 27th place by lap 5 and ran in a second draft behind the leaders. On lap 7, he radioed that the lead pack was beginning to get strung out, and he would try and re-join the fray. Two laps later he climbed to the 19th position in the lead draft. He climbed into the top-10 on lap 15 behind a draft from Jimmie Johnson. Gordon slipped back to 14th before the competition caution on lap 20. Gordon restarted 13th after taking four tires. On lap 26, he hooked up in a tight draft with Jeff Burton and moved to 8th place. He stayed behind Burton and moved up to 5th on lap 27, before the outside line powered past. Gordon dropped to 22nd on lap 33 after choosing the wrong drafting line. He remained in the second draft for the next 15 laps.

On lap 48, Gordon worked with Tony Stewart in the second draft back in 24th position. The pair worked out a drafting arrangement to move up in the running order. Gordon came to pit road for a green flag stop on lap 65. After the stops cycled through, he ran in 20th place on the low line before drafting back into the top-10. The caution waved on lap 76 when Michael Waltrip hit the wall off turn four. Denny Hamlin spun toward the infield grass in the chain reaction incident. Pit stops followed with Gordon opting for left side tires and exited pit road in 3rd place. He took the lead of the race on lap 80 and ran in a tight draft with Elliott Sadler. Two laps later, Sadler was pushed into the lead by Kurt Busch. The caution waved on lap 84 after Johnny Sauter was turned sideways in the tri-oval. He bounced off Busch and Waltrip, while collecting Matt Kenseth and Paul Menard in the melee.

On the restart, Gordon pushed David Reutimann to the top spot. On lap 90, Gordon jumped to the high side to take the lead. However, his time at the front was short lived as the middle line powered past and pushed him out of the top-10 within seconds. Ten laps later he was in danger of losing the draft after he fell to 30th. Regan Smith’s blown engine on lap 100 brought the caution and allowed Gordon to make up the distance. Gordon spent the next 25 laps running in 24th with Mark Martin. With 60 to go, he hooked up with Martin and moved to 15th. Three laps later, he got a drafting push from Johnson to move into the top-5. However, he was hung in the middle line and lost positions. He fell back to 30th and ran there until green flag pit stops with 42 laps to go. Gordon changed two tires and ran 15th after the stops. With 30 laps to go, he moved to the front of the field for a single lap, before dropping back in the draft. With 12 laps to go, Bobby Labonte spun on the backstretch to bring out the caution. Gordon opted for two tires on pit road and restarted in 17th place.

On the restart, Gordon worked with Mark Martin to move into the top-10. However, with 7 laps to go, Gordon moved low on the backstretch and was forced onto the apron by Jimmie Johnson’s late move. Gordon slipped back after cracking the throttle and was collected in a wreck on the frontstretch after Jeff Burton hit the wall and spun into Gordon’s path. The DuPont crew made repairs and Gordon received the free pass to get back on the lead lap due to a wreck involving Johnson. Gordon was distantly behind the final battle for the lead as Harvick won in a photo finish. Gordon dropped to 10th in the series points standings, and trails Johnson by 193. 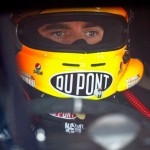 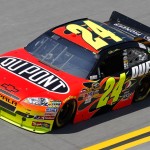 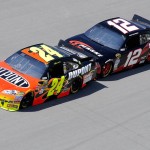 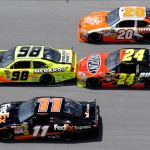 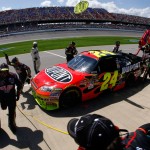 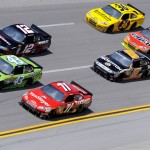