You are here: Home / Feature / Richmond In Car Audio

May 2 – – The scene was all too familiar to Jeff Gordon fans. Their driver was leading the race in the closing stages — and pulling away. However, a late race caution flag at Richmond International Raceway wiped out Gordon’s lead in the Crown Royal 400, and he eventually lost the top spot with just five laps remaining.

Gordon started 4th and passed Jimmie Johnson for the 3rd position on lap 2. Three laps later he took the runner-up spot from David Reutimann. He held the second position until the first caution on lap 45 for Joe Nemechek’s cut tire. The field came to pit road with Gordon exiting in 4th place after swinging wide to exit his stall because of Denny Hamlin directly in front. On the restart, Gordon moved to the outside line and took 3rd from Jamie McMurray. He took 2nd from Kevin Harvick on lap 62 but ran distantly behind race leader Kyle Busch on the long green flag run. Gordon inherited the lead when Busch came to pit road on lap 143. Two laps later, Gordon came to pit road for tires and gave up the top spot. When the stops cycled through, Busch remained as the leader with Gordon in 2nd place. A debris caution on lap 154 brought the leaders back to pit road with just 9 cars on the lead lap. Gordon exited in 3rd place after a four-tire change.

On the restart, Gordon immediately took the 2nd position from Clint Bowyer on lap 162. Debris on the backstretch necessitated a caution flag on lap 171. Pit stops followed and Gordon exited in 3rd behind Ryan Newman who took two tires, and Busch. On the restart, Gordon dove low to pass Newman and ran side by side with Busch for the race lead. Busch held the top spot, and Jeff Burton took the 2nd position from Gordon on lap 180. Gordon passed Busch for 2nd on lap 240 and closed to less than 1.5 seconds behind Burton for the race lead. On lap 250, Gordon got a run off turn four and took the lead from Burton. He came to pit road for a green flag pit stop on lap 268 and held the lead through the cycle. Gordon continued to lead the race and came to pit road for a green flag pit stop with 37 laps to go. The complexion of the race changed with 34 laps to go when Elliott Sadler cut a tire and spun on the frontstretch.

Gordon stayed out and started on the inside with 23 laps to go. He pulled away to the lead, but David Ragan’s spin with 21 laps to go slowed the field. Gordon led the field to the restart with 15 to go, and hauled the mail into turn one to get the lead. With 11 to go, Sam Hornish destroyed his car on the backstretch to bring out the caution. Gordon and Kyle Busch came to the restart with 5 laps to go. Busch took the lead on the outside line and Gordon washed up the track in turn three battling Kevin Harvick for the runner-up spot. Busch pulled away to win his first race of the season. With the runner-up finish, Gordon moved from 10th to 6th in the series points standings. 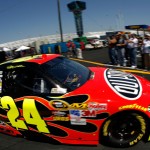 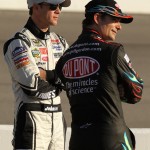 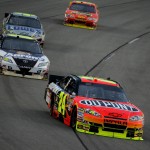 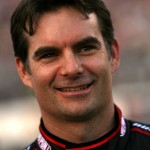 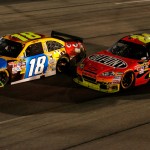 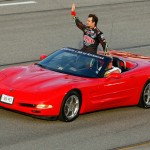 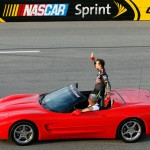 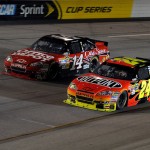 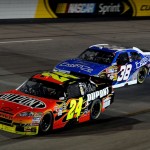 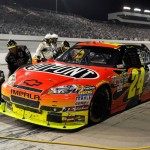 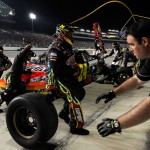 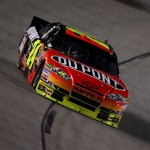 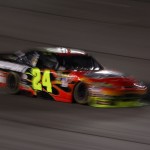 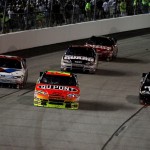 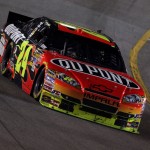 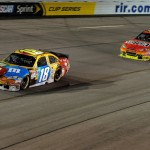 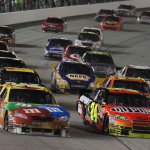