You are here: Home / Feature / Dover In Car Audio

Dover Internatonal Speedway has been one of Jeff Gordon’s most vexing tracks over the last five years. Gordon struggled with handling issues during the Autism Speaks 400 and finished 11th. He dropped from 4th to 6th in the series standings.

Gordon started 15th and dropped two spots in the first 10 laps while battling a tight handling condition. After 20 laps he regrouped to take back the 15th spot from Jeff Burton. He ran in 14th when the first caution waved on lap 54 for Sam Hornish’s wall contact. Gordon exited pit road in 13th place. On lap 65, he took 11th from David Reutimann and set his sights on the top-10. Twelve laps later, he entered the top-10 with a pass on Denny Hamlin. On lap 90, he took 9th from Mark Martin as his steady climb continued. By the 100-lap mark, Gordon was up to 7th. However, the car went to the tight side and Gordon dropped to 8th on lap 115. Gordon came to pit road for a green flag pit stop on lap 135. He battled a tight condition and dropped to 9th before Marcos Ambrose hit the wall to bring out the caution on lap 164. Gordon exited in 10th place after the crew removed a spring rubber to loosen the car up.

At the 200-lap mark, Gordon had slipped to 12th and complained about the handling to crew chief Steve Letarte. He ran 12th when the caution waved on lap 22 for Marcos Ambrose’s cut tire. He left pit road in 15th place and had moved to 13th when a caution for Sam Hornish’s wall contact slowed the field on lap 245. Gordon opted for a two tire change and gained four spots on pit road, departing in 8th place. Two drivers stayed out and Gordon restarted in 10th on lap 249. The handling didn’t improve and Gordon dropped to 13th before the next caution flag on lap 276. With 108 to go, Gordon had moved up to 9th place. Five laps later, he fell to 12th after a brief altercation with Greg Biffle in turn one. Gordon came to pit road for his final pit stop with 36 laps to go. He ran 11th but was distantly behind race leader Kyle Busch in the closing stages. Busch went on to win his second race of the season and 18th of his career. 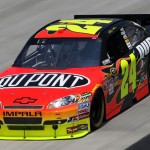 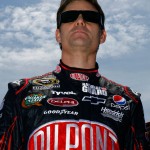 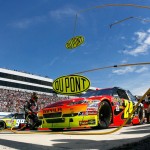