You are here: Home / Feature / Richmond II In Car Audio

September 12 – – The Joe Gibbs Racing team served notice to Jimmie Johnson that his march to a fifth consecutive title might have a roadblock. Denny Hamlin and Kyle Busch battled for the victory at Richmond International Raceway before Hamlin came away with his series-leading 6th victory of the season.

For Jeff Gordon, it was a frustrating night where he was never a factor for the race lead. Gordon started 22nd battled handling issues at the outset. He dropped to 25th by lap 30. David Reuttiman’s spin on lap 54 off of Kurt Busch’s front bumper brought the caution flag. The lead lap cars came to pit road with Gordon opting for chassis adjustments. Gordon restarted in 28th and quickly moved up to 27th around Dale Earnhardt Jr. Two laps later he moved into the 25th position. At the 100 lap mark, Gordon had advanced to 21st place, but was complaining about the handling of the car. On lap 141, race leader Denny Hamlin put Gordon a lap down. Three laps later the caution waved after Terry Labonte made contact with the wall after cutting a tire.

Gordon came to pit road and restarted 18th. He was in position for the free pass if a caution came out, but was passed for position by Regan Smith on lap 160. Gordon re-took the spot from Smith 10 laps later. On lap 226, light rain began falling to bring out the caution. Gordon was awarded the free pass and got back on the lead lap. With 73 laps to go, Gordon came in for a perfunctory pit stop. He made a late race charge up to 14th, but the laps wound down too quickly. Gordon took 13th from Matt Kenseth with 21 laps to go, and passed Jeff Burton for 12th two laps later.

Gordon enters the Chase in 8th in the series standings — 60 points behind Hamlin. 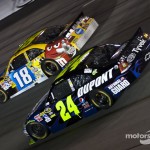 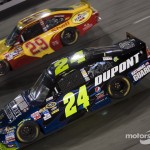 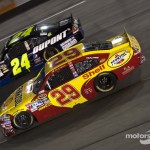 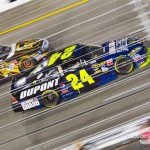 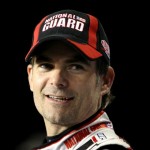 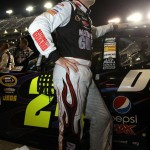 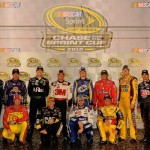 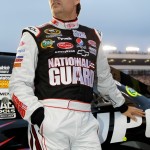