You are here: Home / Feature / Kansas II In Car Audio

October 4 – – There were a lot of positive signs for Jeff Gordon in the Price Chopper 400 at Kansas Speedway. He finished in the top-5 for the first time in 10 races. He moved up three spots in the points standings. And he led 29 laps — his 7th highest total of the 2010 season. Gordon’s 5th place finish propeled him to within 58 points of series leader Jimmie Johnson. Gordon gained ground at Kansas. The question is: Did he gain enough? “It was a good race for us,” Gordon said, “but I felt like it could have been better.”

Gordon started 3rd and moved to the runner-up spot at the outset. He ran down and took the lead from Kasey Kahne at the 30-lap mark. Gordon held the top spot through a round of caution flag pit stops, before losing the lead to Matt Kenseth on lap 63. Tony Stewart then got around Gordon to send him back to 3rd on lap 67. He fell to 4th on lap 78 after Greg Biffle passed. Gordon came in for a green flag pit stop on lap 98, which included a chassis adjustment. Gordon dropped to 7th when the stops cycled through the field.

The adjustments seemed to help Gordon as he moved to 6th on lap 118. He remained there until a cycle of green flag pit stops on lap 148. A caution for David Reutiman’s spin brought the leaders to pit road. Gordon opted for two tires and restarted in 7th place on lap 160. Gordon got loose on the inside of Ryan Newman on lap 162, which halted his forward momentum and sent him to 8th place. Kasey Kahne’s cut tire and shredded fender brought out the caution on lap 166. A miscommunication between Gordon and crew chief Steve Letarte resulted in Gordon staying on the track. On the restart, Gordon fell out of the top-10 while battling on older tires. A caution for Kevin Conway’s blown engine slowed the field and allowed Gordon to come to pit road for fresh tires.

Gordon restarted in 14th with 75 laps to go. He moved into the top-10 within two laps of the restart. However, Kurt Busch took 10th from Gordon with 70 to go. Gordon ran side-by-side with Denny Hamlin for 4 laps, before re-taking the 10th spot from Busch. With 50 to go, he moved to 9th and challenged Newman for the 8th position. Gordon made his final green flag stop with 31 laps to go. Gordon cycled through the stops in 6th place after a 12.4 second pit stop. He passed Matt Kenseth for 5th with 18 to go and held off Carl Edwards in the closing stages to post his first top-5 finish since Chicagoland Speedway in July. 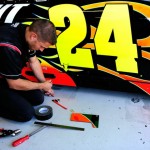 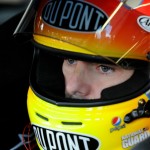 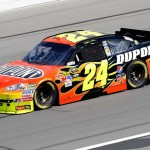 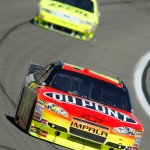 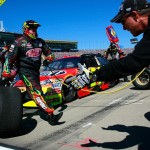 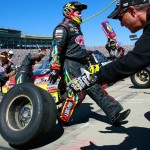 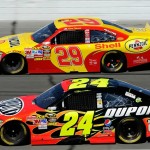 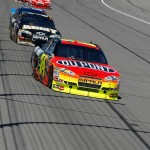