You are here: Home / Feature / Charlotte II In Car Audio

October 17 – – Jeff Gordon turned in perhaps the most disappointing performance of the 2010 season with a 23rd place effort at Charlotte Motor Speedway. Gordon dropped to 156 points behind Jimmie Johnson in the points standings as his title chances nearly evaporated in a single night. Gordon struggled with handling before a battery issue dropped him off the lead lap. A late race pit road speeding penalty sealed his fate on a disappointing evening.

Gordon started on the pole and opted for the outside line. He took off to a comfortable lead before a caution on lap 2 for Ryan Newman’s crash slowed the field. On the lap 7 restart, Kyle Busch powered past Gordon on the outside line off turn 2. Gordon dropped to 3rd after Carl Edwards went by. Gordon re-assumed the runner-up spot from Edwards on lap 10. Gordon dropped to 3rd two laps later after Paul Menard passed. The second caution waved on lap 23 after Kurt Busch spun off turn 4. The leaders came to pit road and Gordon exited with the lead — the benefit of having the first pit stall. Gordon lost the lead to Busch immediately after the restart as Gordon slipped to 3rd when Menard went by. Gordon fell to 4th before the next caution on lap 34 when Jimmie Johnson spun off turn 2.

Gordon moved up to 2nd on the restart by getting around Joey Logano in turn 2. He ran distantly behind Kyle Busch before a round of green flag pit stops on lap 77. A debris caution on lap 106 tightened the field as the leaders came to pit road. Gordon held the 2nd spot through the round of pit stops. He ran distantly behind Busch after the restart before a caution on lap 124 for Kasey Kahne and Sam Hornish’s incident on the frontstretch slowed the field. Gordon came to pit road for fuel and restarted 7th on lap 130. He dropped to 8th when Denny Hamlin passed after a brief battle. Gordon took 7th from Clint Bowyer on lap 142. Gordon fell to 9th battling a loose handling car on lap 150. He came in for a green flag pit stop on lap 177. Track bar and air pressure adjustments followed and Gordon ran in 11th place after the pit cycle.

On lap 191, Gordon drifted up the track and lost power. He switched batteries but went a lap down as Jimmie Johnson went by. Gordon fell to 23rd, and was the first car a lap down. Marcos Ambrose’s spin on lap 203 allowed Gordon to get back onto the lead lap. He came to pit road for a prolonged stop while the crew changed the battery. Gordon restarted 22nd as the last car on the lead lap. He struggled with handling before nearly going a lap down. On lap 239, Robby Gordon’s spin brought the caution and allowed for adjustments on pit road. Gordon restarted in 17th place with 84 to go. However, he slipped to 22nd within two laps of the restart. He ran in 20th before a green flag stop with 40 laps to go. Gordon received a penalty for speeding on the entrance to pit road, and made a pass-through with 38 to go, which dropped him off the lead lap and essentially sealed his fate for the night. Gordon finished 23rd and dropped to 156 points behind Jimmie Johnson. With just five races left in the season, Gordon would likely need Johnson and Denny Hamlin to have at least two sub-par finishes to have a chance at a championship. 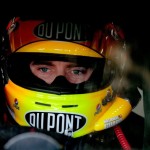 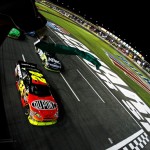 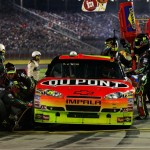 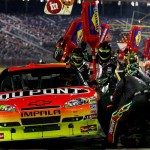 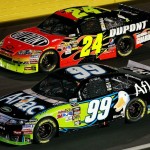 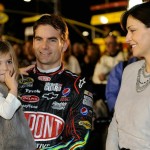 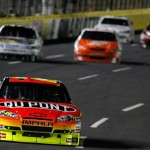 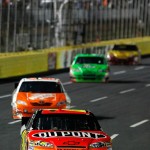 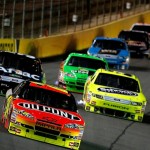 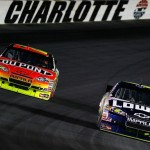