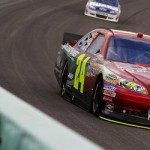 Tony Stewart claimed his third NASCAR championship by winning at Homestead-Miami Speedway. Stewart’s victory thrust him into a points tie with Carl Edwards, who finished second. However, Stewart won the championship due to the first tiebreaker — victories. It was the sixth consecutive season that Hendrick Motorsports’ chassis and engines won the series title. Stewart won 3 out of the last 4 races in the season to claim the championship.

Gordon started 7th and moved to 4th by the conclusion on lap 8. Rain on lap 12 brought out the first caution flag. Gordon came to pit road and exited in 13th place after taking four tires. He re-entered the top-10 on lap 23 and moved up to 5th by lap 30. He passed Ryan Newman for 4th place before a caution on lap 34 for Dave Blaney’s spin. After racing resumed, he took 3rd from Kevin Harvick on lap 46 and moved into the runner-up spot on lap 50. Gordon came to pit road for a green flag pit stop on lap 80. The field cycled through before David Ragan’s blown engine on lap 83. A caution for rain on lap 108 brought the leaders to pit road for a red flag period.

The race resumed after nearly a 90-minute delay at 6pm. Gordon came to pit road for tires and exited in second place behind Kevin Harvick, who opted for two tires. Gordon took the lead after the restart, but lost the top spot to Tony Stewart after pacing the field for 6 laps. Edwards took the 2nd spot from Gordon on lap 130. A caution for Trevor Bayne’s wall contact brought the field to pit road. Gordon restarted in 5th place on lap 140. However, he slipped to 10th before a caution for Jimmie Johnson’s spin on lap 145. Gordon steadily moved back up to 7th on lap 153. A caution for a multi-car wreck involving Landon Cassill, Trevor Bayne, and Cole Whitt slowed the field on lap 155. Pit stops followed with Gordon exiting in 5th place. He fell to 9th on the restart, but regrouped to take 8th from Newman with 100 laps to go. With 85 to go, Gordon moved into 6th place as championship contenders Edwards and Stewart battled at the front of the field.

Gordon came in for a green flag pit stops with 68 laps to go and cycled through in 6th place. A caution flag for rain with 55 laps to go slowed the field. After a lengthy caution period, Gordon ran 10th with 35 to go while Stewart and Edwards battled 1-2 at the front for the Sprint Cup title. With 20 to go, Gordon moved up to 7th place as Stewart led Edwards by more than a second for the Cup series championship. With 10 to go, Gordon advanced to 5th place.

Road Ahead: After some down time over the Thanksgiving holiday, Jeff Gordon will head to Las Vegas for the NASCAR banquet on December 2. Following that, he’ll visit Rwanda with his family to view the health situation as the pediatric cancer care center is built.

Battling for the lead 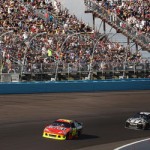 It was a day to forget for Jeff Gordon at the reconfigured Phoenix Raceway. He battled handling issues in the first half of the race, and brake problems in the second half. Gordon finished off the pace in 32nd place, six laps down. It was Gordon’s fifth finish lower than 20th in the 9 Chase races. Gordon was mathematically eliminated from the title picture with the finish, though he was realistically eliminated several weeks ago.

Gordon started 23rd and moved to 18th in the opening 10 laps which were sandwiched around two early cautions. He moved to 15th by lap 25 and passed Jimmie Johnson for 14th before the competition caution on lap 40. He gained three spots on pit road and restarted 11th on lap 44. However, he faded to 14th on the restart and spent the bulk of the second run mired outside the top-10. A caution on lap 93 brought the leaders to pit road with Gordon exiting in 14th place. The restart provided an adventure as Gordon was shuffled back to 21st. He was running 19th when a green flag pit stop sequence began at the halfway point of the event.

A caution flag trapped Gordon a lap down on lap 160. Gordon came to pit road to fix a brake issue during the next caution flag on lap 167. After the pit stop, Gordon ran in 29th place. The next caution waved on lap 177 when Brian Vickers intentionally wrecked Matt Kenseth in turn three. Gordon’s brake problems continued when the race resumed and he went a second lap down on lap 212. An extended pit stop under caution on lap 220 focused on the brakes. It took just 20 laps for Gordon to lose a third lap to the leaders. He ran the rest of the event at least 10 miles per hour off the pace and finished 32nd — six laps down.

Road Ahead:   The 2011 NASCAR season concludes at Homestead-Miami Speedway — just one of two tracks on the NASCAR circuit where Gordon has not scored a victory in the Cup series. 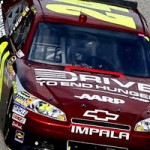 Tony Stewart captured his second consecutive victory and closed to within 3 points of Carl Edwards with just 2 races remaining in the 2011 season. Jeff Gordon finished 6th after battling a loose handling condition when the sun went down. Gordon started 23rd and steadily marched forward. He moved into the top-15 by lap 80 and entered the top-5 in the second half of the race. He ran as high as third before handling issues surfaced on the longer run. Nevertheless, the 6th place finish is Gordon’s best effort at Texas since winning at the track in April 2009 — a span of 5 races.

Road Ahead:  The penultimate race of the 2011 season takes the Cup series to the reconfigured one-mile oval in Phoenix. JG scored the victory in Phoenix in February, prior to the reconfiguration which added banking and a different angle on the backstretch.