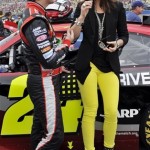 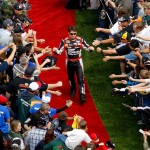 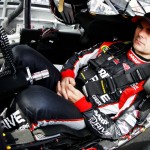 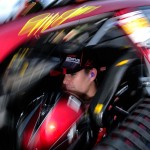 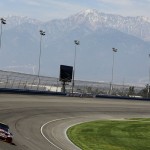 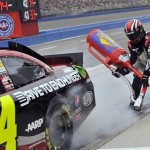 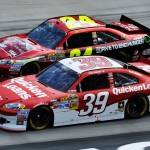 What seemed like a certain top-5 finish for Jeff Gordon turned into his second finish of 35th or worse in the first 4 races after contact from Dale Earnhardt Jr. resulted in a wreck. Gordon started 4th and moved to the runner-up spot in the opening laps. However, handling issues dropped him to 4th before a caution for Kasey Kahne’s wreck slowed the field. Kahne, who came to Hendrick Motorsports with high expectations surrounding his effort, has not finished higher than 19th thru four races. Gordon opted for a two-tire change and restarted outside the top-10 due to others staying on the track. Gordon ran in 6th place at the 100-lap mark. He moved up to 3rd by lap 115. A caution for Ken Schrader’s wall contact on lap 116 slowed the field and resulted in pit stops. Following stops, Gordon held onto 3rd. He passed Brian Vickers for 2nd place and then closed in on Brad Keselowski for the race lead. However, he slipped to 3rd on lap 253 when Matt Kenseth went by. Gordon took the race lead on lap 258 during a green flag pit stop sequence.

Gordon battled tight handling and dropped to 4th on lap 275, and fell to 5th by lap 300. He came to pit road during a caution flag on lap 340 and restarted in 5th place. While battling Dale Earnhardt Jr for position on lap 360, Gordon sustained heavy damage after his teammate clipped his tire. Gordon went into turn 3 with a flat tire and spun backwards into the wall. He exited the #24 car with a damaged left rear bumper, spoiler and quarterpanel. He returned to the race more than 100 laps down and finished 35th.

*Gordon led a lap for the fifth consecutive race.
*He tied his worst career finish at Bristol (also 35th in Aug 1997).
*Gordon is now 23rd in the series points standings — that’s the lowest he’s been after 4 races in his NASCAR career.

Turning point
Gordon battled a tight handling car in the second half of the event. He was running consistently in the top-5 when contact from Dale Earnhardt Jr ruined a promising finish.

Comments
JG: “I think we bumped more than we should have is the way it looks like. We definitely didn’t hit in the right location, because I think the tailpipe or something just cut the left-rear (tire) immediately. We didn’t hit that hard. We were a little bit too tight and he was pretty good on the restart there and we were racing hard. I know that it was intentional, but it certainly ruined our day. I hate it for this race team. There were times we had the best car out there and I think we could have got back to that before this thing was over. There was contact. Just hard racing here at Bristol. We weren’t very good there on the restart; we were a little bit too tight still. We were making adjustments there to fix that. We were really strong earlier in the race. I was looking forward to getting to the end. Junior (Dale Earnhardt, Jr.) got underneath me. When he got into me, it looked like the tailpipe just caught the left rear (tire) and cut the left rear. I don’t know what cut the left front (tire), but something cut the left front too and so around we went. I knew it immediately, and I let off trying to keep it out of the wall, but there was no chance. Ruined our day. Hate it for this team.” 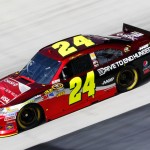 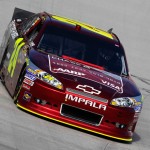 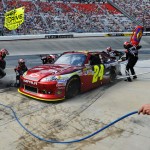 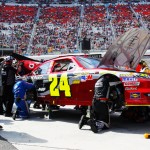 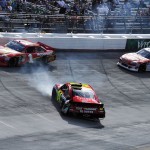 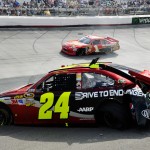 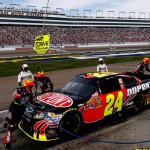 Jeff Gordon struggled with handling for the balance of the day at Las Vegas Motor Speedway. Gordon started 16th and moved to 11th by lap 4 while battling a tight handling condition. He moved into the top-10 with a pass on Kasey Kahne on lap 23. He pitted under caution on lap 47 and ran 7th on lap 50. He slipped to 8th during the next run before a caution on lap 74. He took 4 tires and restarted in 19th place. However, he struggled on the restart and dropped to 24th by lap 90. After falling to 26th, Gordon came to pit road under green on lap 119 for tires and adjustments. Following the stops, Gordon ran in 21st when the caution waved on lap 128. Gordon stayed out to lead a lap during a green flag pit stop sequence, but dropped off the lead lap when he came to pit road on lap 181.

Gordon got back on the lead lap by taking the wave around during a caution period with 62 laps to go. A caution with 39 laps to go assured Gordon of a lead lap finish. He moved into the top-15 and finished 12th after drivers ahead of him experienced wall contact/spins in the final laps. Gordon moved up to 17th in the series standings.

A caution flag with 62 laps to go allowed Gordon to take the wave around and get back on the lead lap. 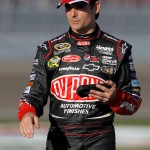 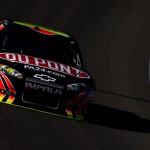 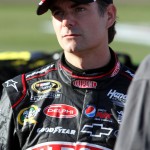 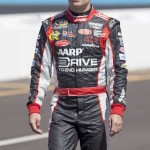 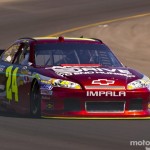 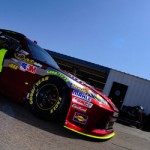 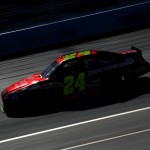 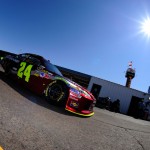