It looked as if Jeff Gordon has his best car at Dover International Speedway in more than 6 years. However, once again, a dose of bad luck cost him a legitimate shot at his 86th career victory. Gordon led 60 laps, but a loose left rear wheel after a pit stop doomed his chances as the laps wound down. Gordon finished 13th and lamented another lost opportunity.

Gordon started 14th and was running 13th on lap 9 when a major pileup occurred on the backstretch after Tony Stewart tapped Landon Cassill. More than 12 cars were collected in the melee. When the green flag waved, Gordon advanced into the top-10 on lap 15. By lap 30, Gordon moved up to the 7th position with a pass on Kevin Harvick. Gordon entered the top-5 on lap 56 after moving around Kyle Busch. Following a cycle of green flag pit stops, Gordon ran in 5th place. At the 100-lap mark, Gordon ran 3rd behind Jimmie Johnson and Mark Martin. The second caution waved on lap 111 when David Reuttiman’s engine expired. Gordon departed pit road in 5th place, but moved back to 3rd by lap 135. He took the runner-up spot from Busch on lap 145. A caution for Carl Edwards’ wall contact on lap 163 slowed the field.

Gordon took the race lead from Johnson shortly after the halfway point. However, Gordon slowed on lap 245 and came to pit road three laps later for tires. A loose left wheel was the culprit that cost Gordon a lap. As green flag pit stops began, Gordon stayed on the track and re-assumed the top spot. He came to pit road with 75 laps to go for a four-tire change and returned to the event one lap down. A caution with 60 laps to go trapped Gordon a lap down. Gordon stayed on the track for the wave-around to get back on the lead lap. He restarted in 18th place with 55 to go. Kurt Busch’s blown engine and subsequent caution allowed Gordon to get fresh tires. Gordon moved to 16th with 46 to go and took 15th from AJ Allemdinger one lap later. Gordon was running 13th when the caution waved with 37 to go for Jeff Burton’s blown engine. He came to pit road for tires and restarted in 16th place.

* Gordon led more laps during the event than he had in the previous 11 races at Dover combined.

Turning point
While leading the race (and pulling away) on lap 245, Gordon experienced a loose wheel and needed a pit stop. Although he may have scored the win if the race went to the end without a caution, the yellow flag on lap 340 hindered his efforts.

JG’s comments
“We had the best race car. We’ve just been talking about this too many times this year. We cannot afford to make mistakes. We had the car to win the race and it’s unfortunate.. I’m just tired of the same old things — one thing or another getting us. The fastest car doesn’t always win the race. And we’re sitting here in 13th or whatever; it’s silly.”

AS BAD AS YOUR MISFORTUNE WAS, IT SEEMED LIKE IT WAS GOING TO WORK OUT AND YOU WOULD BENEFIT FROM IT

“Until that debris caution? Yeah, I can’t wait to see that debris on TV. I’d like to see it because I certainly never saw it. I’m not going to make any comments until I see what the reasoning for it was. I don’t know who you blame if there really wasn’t much out there because all the media has been talking about all week long is oh, there’s no cautions, there’s no cautions. It used to be debris cautions. So, who do you blame that on?”

IS IT FRUSTRATING BECAUSE YOU WERE IN THE LEAD AND THEN YOU HAD THE TIRE PROBLEM AND YOU WERE MAKING YOUR WAY BACK?

“Ultimately, we put ourselves in this position to get his finish. So, that’s very frustrating. We’ve had things out of our control this year. And I’m not really sure what happened. But obviously something happened. And then I don’t know what happened. But we definitely had a loose left rear. It didn’t go on right to begin with and the left-rear tire-changer (Chad Avrit) knew that. And so when I started to complain about it, we knew that there might be an issue there and there was. So, in some ways we got fortunate today. I could have stayed out there and wrecked because it wasn’t really vibrating. It was getting real loose.”

WERE RESTARTS AS CRITICAL AS THEY LOOKED?

“You know, it was the greasiest restarts that I’ve ever felt here. There was just zero-grip for the first three, four, or five laps. So you really couldn’t even race one another on a restart because you were so out of control. And there’s a lot of rubber laid down on the race track and then the way the rubber on the tires matched up to it after you got going there was horrendous. Other than that, the tire was awesome. I really liked it. We ran great with it and the restarts were definitely hairy.”

YOU’VE HAD SO MANY FRUSTRATING MOMENTS THIS SEASON. DOES THIS ONE TAKE THE CAKE? OR HAVE YOU JUST HAD SO MUCH CAKE THAT IT’S ALL THE SAME?

“It’s always more frustrating when you’ve got a car that can win; and you show it by going up there and taking the lead. We don’t care about finishing top 15 or top 10 right now. That does nothing for us. We need wins.” 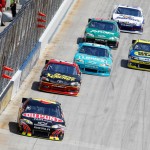 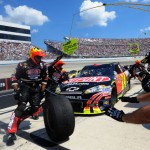 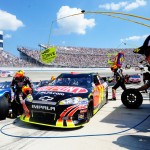 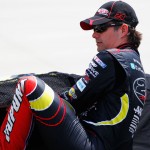 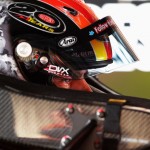 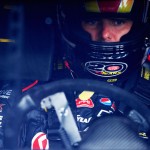 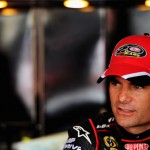 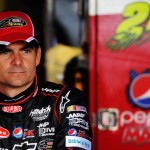 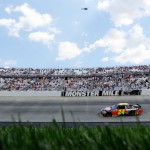