Dale Earnhardt Jr snapped a four-year winless skid with a victory in the Quicken Loans 400 at Michigan Speedway. Jeff Gordon posted a 6th place finish, which was the 400th top-10 finish of his NASCAR Cup series career. Gordon became the second youngest driver to achieve the milestone. It was Gordon’s fifth top-6 finish at Michigan in the last seven races there.

Gordon started 26th and slowed to avoid Kurt Busch’s spinning car on lap 2. He restarted in 30th place on lap 5. The second caution waved on lap 10 for Josh Wise’s engine with Gordon advancing to 25th. He ran 26th when the competition caution came on lap 25. Gordon came to pit road for tires and held the 26th spot. He moved up to 24th by lap 40 and ran 21st when the competition caution slowed the field on lap 50. Gordon opted for two tires and restarted 17th on lap 54. He moved up to the 14th position within 5 laps of the restart, and ran 13th on lap 70. Two laps later he took the 12th spot from Jimmie Johnson and entered the top-10 on lap 80. A debris caution on lap 81 brought pit stops with Gordon again opting for two tires. He restarted in 4th place on lap 84 and held the spot past the halfway point of the race.

Gordon stayed out to lead a lap during a green flag pit stop sequence on lap 119. He came to the pits for a four-tire change on lap 120. Kurt Busch’s spin on lap 121 brought out the caution with Gordon inheriting the top spot. He lost the lead in turn one to Dale Earnhardt Jr after the restart before the caution waved for Joey Logano’s spin on the backstretch, which collected Kasey Kahne. Another caution for Denny Hamlin’s spin on lap 133 slowed the field. The green flag waved on lap 140 with Gordon dropping to 3rd behind Earnhardt Jr and Tony Stewart. Greg Biffle passed Gordon on lap 159 as the DuPont Chevrolet battled loose handling issues. He came to pit road for a green flag pit stop on lap 165 and cycled through in 6th place. As the laps wound down, Gordon was unable to make headway due to a blistered tire. He finished 6th and moved to 20th in the series points standings.

Turning point
Gordon battled for the race lead from lap 120-140, but battling handling issues in the closing stages. Blisters on the right side tires hindered his efforts to claim a top-5 finish. 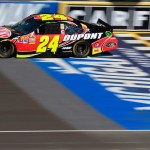 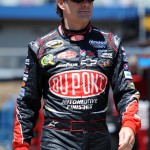 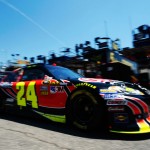 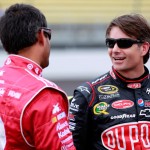 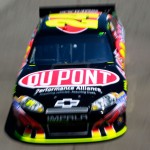 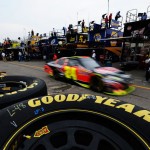 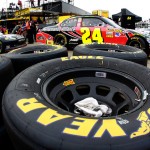 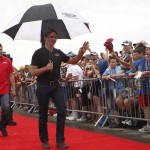 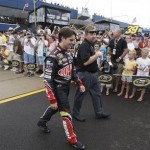 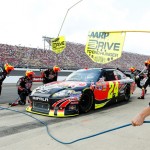