Kasey Kahne held off a late charge by Denny Hamlin to claim his second win of the season and 14th of his career. Jeff Gordon posted his fourth top-6 finish in the last 5 races with a 6th place effort in the Lenox 301 at New Hampshire Motor Speedway. However, Gordon remains 17th in the series standings and will need at least two victories to qualify for the Chase for the Championship.

Gordon started 8th and moved up to 6th by lap 10. He entered the top-5 with a pass on Martin Truex on lap 23, and took 4th from Clint Bowyer on lap 32. Gordon led 1 lap before coming to pit road during a green flag stop sequence on lap 68. He returned to the race in 3rd position due to then-race leader Kyle Busch’s pit road penalty. A debris caution on lap 89 slowed the field and brought nearly all of leaders to pit road — except for one. Gordon stayed on the track and assumed the race lead. However, Gordon chose the outside lane for the restart and lost the top spot to Denny Hamlin entering turn one. He dropped to 3rd when Jimmie Johnson passed on lap 109. By lap 130, he dropped to 4th place as skies began darkening for approaching rain showers. Gordon came to pit road for a green flag stop on lap 146. He returned to the race a lap down in 20th place due to staying out on the track during the earlier caution. As the race leaders began pitting a few laps later, Gordon moved up to 2nd place behind Hamlin.

Gordon battled handling issues in the mid-stages of the race and dropped to 4th on lap 168. Brad Keselowski went by on lap 186 to send Gordon back to 5th. A debris caution on lap 191 brought the lead lap cars to pit road and allowed Gordon to get back on the same pit sequence. Gordon restarted in 10th place after changing four tires. Gordon moved to 9th before a caution on lap 232. Gordon came to pit road for his final pit stop and restarted 7th. He dropped to 9th when Hamlin passed on lap 250. However, he made in-roads and moved back to 7th with 35 laps to go. With 19 laps to go, he took 6th from Kevin Harvick.

“It’s a great effort by the team, but definitely not what we were hoping for. This is a track I feel like we can win at. We just missed it. We just weren’t there. That first run, I thought, ‘wow, we really have something for them.’ But it’s so hard to pass and we kind of lost the handling on it. Yeah, it’s a 6th when you look at the rest of our season, that’s pretty good. But when you look at what we have to do over the next 7 races, it’s definitely not something we’re content with.”

NOT A BAD FINISH CONSIDERING YOU KIND OF TOOK A LONG WAY TO GET THERE?

“Yeah, I’m really disappointed in today. I don’t feel like that we had the car that we needed to be more competitive which I thought we could. When we got track position we weren’t able to maintain it. It was just a disappointing day when you look at what our goals are right now. We’ve got to be up there battling for wins if we are going to make this Chase and then get those wins. At the beginning I thought we were equally as good as anybody. I don’t know from that second run on it just went downhill.”

THE PIT STRATEGY YOU TALKED ABOUT YOU WERE IN A POSITION WHERE YOU CAN ROLL THE DICE IN SOME THINGS WAS THAT AN INDICATOR OF THAT TODAY?

“Yeah, I think Alan wanted to see what it was like in clean air. It was a risk. That is the position that we are in right now we’ve got to take those kinds of risks. It didn’t work out, but it wasn’t that bad. I think we feel back to third or fourth. We were still about where we were prior to that. I don’t know we just really didn’t keep up with the track. This tire, I tell you, Goodyear has got to go back to the drawing board. They came here with a new tire and it is not a very good tire. I think they know it. I’m hoping that they that they can come up with something a little bit better than this.” 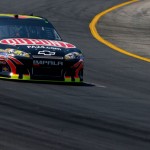 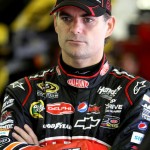 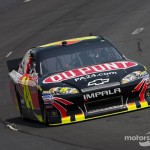 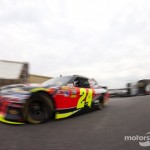