As Jeff Gordon pulled closer to Denny Hamlin on the final lap at Atlanta Motor Speedway, he opted for the high line in turn 3. Hamlin held low and finished ahead of Gordon for his second consecutive victory. Gordon, needing a win to qualify for the NASCAR Chase, lamented the lost opportunity. “I guess I’m getting soft in my old age,” Gordon said. “I’m too nice. Fifteen years ago, I would’ve moved him up the racetrack.”

Gordon started 5th and moved up to 3rd by the end of lap 5. He took 2nd from Greg Biffle on lap 7 and moved past Tony Stewart for the race lead on lap 9. Kyle Busch passed Gordon on lap 16 to take the top spot. Denny Hamlin went by on lap 18 as Gordon battled a loose handling condition. The first caution waved on lap 40 for Aric Almirola. Pit stops followed with Gordon departing in 7th place. He moved back into the top-5 by lap 50, but was unable to make further headway. He came to pit road on lap 84 for a green flag pit stop. A debris caution slowed the field on lap 130. Gordon lost a spot on pit road and restarted in 6th place. However, Gordon was forced to back off due to traffic and fell to 14th on lap 140. He regrouped and moved back up to 12th by lap 150. He re-entered the top-10 on lap 158 with a pass on Ryan Newman.

After falling to 14th following a green flag pit stop sequence, Gordon worked his way back to the top-10 on lap 190. With 100 laps to go, Gordon was in 8th and battling a loose handling car. A caution with 83 laps to go for Juan Pablo Montoya’s wall contact brought the lead lap cars to pit road. Gordon departed pit road in 11th place. He took 10th from Sam Hornish with 73 laps to go, and moved up to 8th three laps later. A caution for Carl Edwards’ engine with 68 laps to go brought the leaders to pit road. Gordon exited pit road in 7th and was running ahead of a crash on the backstretch. Jimmie Johnson was turned sideways and collected Ryan Newman with 58 laps to go. Gordon came to pit road for tires and restarted in 8th place. He quickly moved into the top-5 and took 4th from Kyle Busch with 42 laps to go.

Gordon moved to 3rd with 40 laps to go with a pass on Brad Keselowski. Six laps later he took the runner-up spot from Denny Hamlin. He began closing on Martin Truex as the laps wound down. Jamie McMurray’s wall contact with 4 laps to go brought out the caution. Pit stops followed with Gordon losing a position going from 2nd to 3rd for the green/white/checkered restart. Gordon moved up to 2nd and tried the high line to get around Hamlin entering turn 3. Hamlin held the bottom line and went on to score the victory.

Barring a victory by a wildcard contender at Richmond, Gordon will need to finish 13 spots ahead of Kyle Busch to claim the final spot in the NASCAR Chase.

Gordon was running 2nd in the closing stages when a caution for Jamie McMurray’s wall contact brought the caution. Gordon came to pit road and departed in 3rd place, setting up the dramatic final lap to the finish. 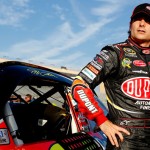 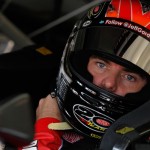 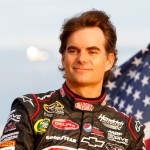 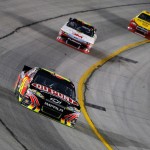 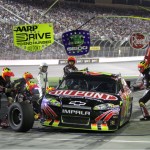 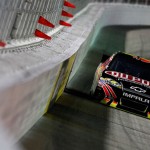 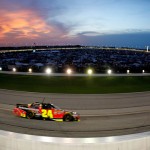