It wasn’t a victory for Jeff Gordon, but a solid 3rd place effort in the Sylvania 300 kept him from falling further behind in the NASCAR standings. It was Gordon’s fourth top-3 finish in the last 5 races. Gordon entered the event trailing by 47 points, and is now 45 points behind. Unfortunately, there are 11 drivers to overcome.

Gordon started on the pole and led the first 3 laps until Tony Stewart took the top spot. Kyle Busch moved past Gordon on lap 11. He held the 3rd spot until the competition caution on lap 40. Gordon re-assumed the lead following pit stops as he accelerated from the first pit stall. Busch took the lead from Gordon just one lap after the restart. He dropped to 3rd on lap 70 after Kasey Kahne passed, and fell to 4th when Denny Hamlin went by on lap 76. He came to pit road for a green flag stop on lap 109 and held 4th place through the cycle of stops. A debris caution on lap 129 slowed the field and brought most of the leaders to pit road. Gordon restarted in 11th and moved into the top-10 on lap 135. At the halfway point of the event, Gordon moved to 8th but was complaining of a lack of rear grip in the car.

Gordon’s forward progress continued as he passed Kevin Harvick and Kyle Busch to take 6th place on lap 175. A debris caution on lap 178 brought pit stops. Gordon held 6th place through the stops. As Hamlin pulled away with a comfortable lead, Gordon took 5th from Tony Stewart on lap 231. He took 4th from Brian Vickers with 60 to go. Gordon’s final pit stop came under green with 53 to go. He cycled through in 5th after Brad Keselowski took 2 tires. After moving to 4th, the caution waved with 30 laps to go for debris. On the restart, Gordon jumped to the inside to take 3rd from Clint Bowyer.

Turning point
A debris caution with 30 laps to go gave Gordon the restart he needed to get past Clint Bowyer for his fourth top-3 finish in the last 5 races. 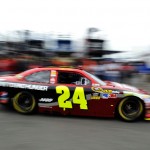 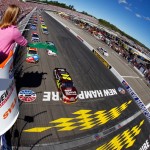 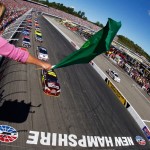 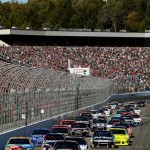 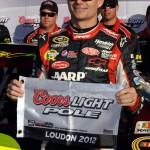