Clint Bowyer held off Denny Hamlin in a fuel mileage battle to win the Bank of America 500 at Charlotte Motor Speedway. Points leader Brad Keselowski dominated the event, but needed a late stop for gas and finished 11th. Jeff Gordon struggled with handling for the balance of the night. He added to his own problems by receiving a costly pit road speeding penalty and finished 18th. Gordon is now tied for 8th in the points standings, 50 points behind Keselowski with 5 races to go.

Gordon started 11th and moved into the top-10 within 2 laps. By lap 10 he had advanced to 8th place. The first caution waved on lap 11 for Matt Kenseth’s cut tire and spin in turn four. Another caution just after the restart on lap 16 collected Jeff Burton and David Ragan. Gordon dropped to 10th on the restart on lap 23. He was in 11th when the third caution waved on lap 36 for Paul Menard’s wall contact. Gordon came to pit road for tires and restarted in 18th place. He moved back into the top-15 on lap 52 and ran 12th before a cycle of green flag pit stops. Gordon stayed on the track to lead a lap before coming to pit road on lap 86. He fell to 14th after pit stops. Gordon ran 13th at the 100-lap mark of the event.

Gordon ran 15th before a green flag pit stop at lap 214. Gordon received a very costly pit road speeding penalty and lost a lap. He put himself into position to get back on the lead lap — as the first car one lap down. However, the race went into a long green flag run. With 30 laps to go, he ran in 16th place, one lap down. He made his final pit stop under green with 18 to go. Following the stop, Gordon ran in 20th place with 10 laps to go — hopelessly trapped off the lead lap. He finished the event 18th. It was his fourth finish of 18th or worse in his last 5 races at Charlotte.

Turning point
A pit road speeding penalty took Gordon off the lead lap and effectively put a major wall between him and a possible fifth championship in 2012. 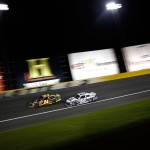 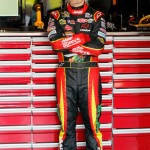 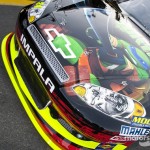 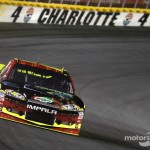