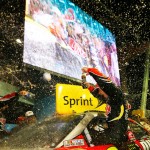 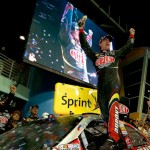 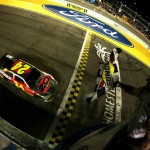 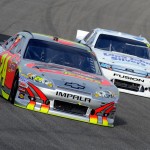 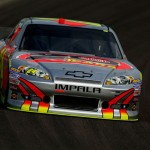 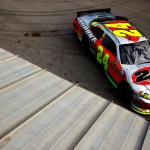 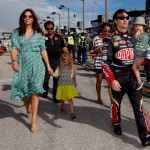 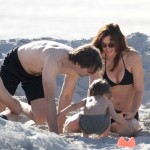 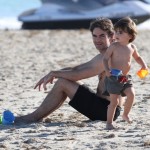 On a day when Brad Keselowski took a major step toward his first NASCAR title because of Jimmie Johnson’s cut tire and wall contact, the major story was not race winner Kevin Harvick. Rather, it was a late race melee involving Jeff Gordon and Clint Bowyer. After several on-track incidents this year, Bowyer hit Gordon in the later stages of the race to take a position. Gordon got into the wall and waited for the #15 car to come around the track. Gordon then turned into Bowyer and sent both cars into the wall. A wild melee in the pits ensued with Bowyer’s crew attepting to get to Gordon after he exited the car. Gordon was credited with a 30th place finish.

Gordon started 11th and gained six spots by lap 7. The first caution waved on lap 17 for an incident involving Mike Bliss. Gordon stayed out and took 6th from Aric Almirola on lap 25. The next caution waved on lap 51 for David Gilliland’s wall contact. Pit stops ensued with Gordon restarting 12th on lap 59. He moved up to 8th by lap 90 and took 6th on lap 97. Gordon came to pit road for a green flag stop on lap 131 and cycled through in 6th place. He took 5th from Kasey Kahne on lap 151, but complained of handling issues. A debris caution on lap 167 brought the lead lap cars to pit road. Gordon fell to 12th for the restart on lap 174. Gordon backed off after his teammate Jimmie Johnson pulled up on the outside and dropped to 15th on lap 175. However, he regrouped and moved up to 12th on lap 185. Gordon re-entered the top-10 with a pass on Matt Kenseth on lap 198 and moved to 8th on lap 212.

The complexion of the championship changed when Jimmie Johnson drilled the wall after cutting a tire with 78 laps to go. And this time, unlike Kansas, the damage was too much to salvage a top-10 finish. Gordon pitted under caution and restarted in 8th place. He briefly fell to 10th before moving back to 8th with 55 to go. David Ragan’s cut tire brought out the caution flag with 39 laps to go. Gordon stayed on the track and restarted in 6th place with 35 to go. He moved to 5th before Tony Stewart’s spin brought a caution with 31 to go. Gordon dropped to 6th before a caution for Sam Hornish’s cut tire with 12 laps to go. On the restart, he moved to 5th before contact from Clint Bowyer put Gordon into the turn 3 wall. Gordon waited for Bowyer to come back around the track and drilled the #15 car into the wall. A wild melee ensued on pit road as Bowyer’s crew attempted to attack Gordon. Bowyer then sprinted from his wrecked car and tried to chase Gordon down in the #24 hauler. Gordon was escorted to the NASCAR hauler for a meeting about his actions

Turning point
Gordon was running 5th at the halfway point, but handling issues hindered his progress in the second half of the event. Of course, the ultimate turning point came with 4 laps to go when contact from Bowyer put Gordon in the wall, thus bringing a dose of payback.

Only the last 30 laps were captured today but at least we grabbed the most exciting part of the race! 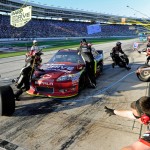 Jimmie Johnson took another step toward his 6th championship with a victory in the AAA 500 at Texas Motor Speedway. Johnson took the lead from Brad Keselowski on the green/white/checkered restart and pulled away to win his second consecutive race. Jeff Gordon finished 14th after battling late-race tire problems and contact from another driver.

Gordon started 16th and gained two spots by lap 20. As the run progressed, Gordon was able to gain more ground. He moved up to 11th by lap 30 before coming to pit road for a 4-tire change on lap 46. Gordon moved into the top-10 following the stops and took 9th from Kasey Kahne on lap 68. He moved to 8th prior to the next round of green flag stops on lap 90. He ran 10th when the caution waved for debris on lap 100. Gordon came to pit road and departed in 10th place. He moved to 6th by lap 130 and entered the top-5 with a pass on Martin Truex on lap 152. Following another round of green flag pit stops on lap 170, Gordon ran in 4th place. He took 3rd from Clint Bowyer on lap 177, but ran distantly behind race leaders Jimmie Johnson and Brad Keselowski. However, a debris caution on lap 186 allowed Gordon to close the gap to the leaders. He lost two spots on pit road and restarted in 5th place on lap 190.

On the restart, Gordon reclaimed 4th from Truex on lap 195. A debris caution on lap 224 brought the lead lap cars to pit road. Gordon lost a spot and restarted in 5th place. He moved up to 4th just after the restart and passed Johnson for 3rd with 90 laps to go. Gordon moved into the runner-up spot with 83 to go with a move around Kyle Busch. However, with 65 laps to go, Gordon came to pit road after wearing out a tire. A caution for debris with 60 laps to go forced Gordon to use the wave around to get back on the lead lap. He restarted in 25th position with 54 to go. Over the next 20 laps he moved up to the 18th position. A caution for Marcos Ambrose’s wall contact with 25 laps to go slowed the field. Gordon came to pit road for tires. He moved to 12th with 16 laps to go, and entered the top-10 two laps later. However, contact from Greg Biffle moved Gordon up the track into Kasey Kahne. Gordon sustained minor sheet metal damage on the right front as Kahne hit the wall to bring out the caution. He came onto pit road for repairs to the right front of the car. Gordon restarted 23rd with 8 laps to go.

At the front of the field, Keselowski and Johnson battled door to door for the lead with Keselowski holding the top spot. A caution for Mark Martin slowed the field with 5 laps to go and brought the green/white/checkered finish into play. Gordon had moved up to 16th prior to Martin’s spin. On the restart, Johnson took the lead from Keselowski to score his second consecutive victory. Gordon finished a disappointing 14th after a tire issue and contact from Biffle. Barring a disasterous race for both Keselowski and Johnson in Phoenix, Gordon will be eliminated from Chase contention following the Checker 500k next Sunday.

Turning point
Gordon came to pit road with 65 laps to go while running 2nd due to a tire going down. A subsequent caution sealed his fate at Texas. 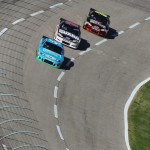 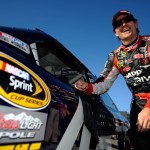 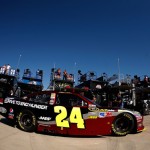 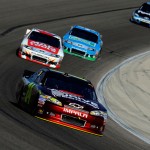