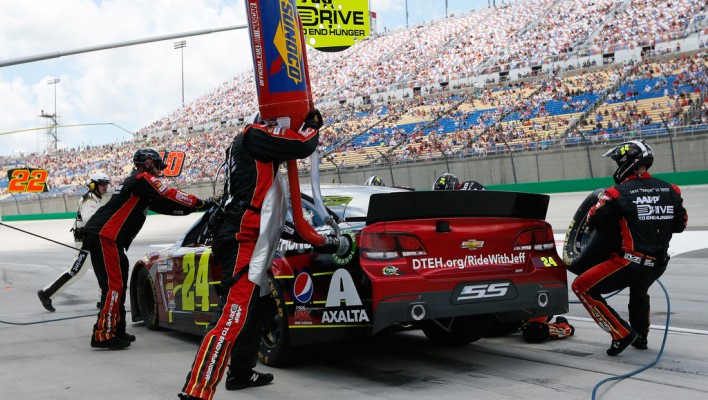 After a bad mid-race break with an ill-timed caution flag, Jeff Gordon fought back from 25th place and seemed on the verge of a possible victory at Kentucky Speedway. However, he faded back from 3rd to 9th on the final restart with 17 laps to go before finishing in 8th place. It was Gordon’s first back-to-back top-10 finishes of the season. He moved to 12th in the NASCAR standings, just 2 points outside the top-10.

Gordon started 12th and moved into the top-10 by the end of lap 2. He ran 9th at the competition caution on lap 30. Gordon opted for 2 tires and restarted 7th on lap 34. He moved to 6th prior to the next caution on lap 39 for Denny Hamlin’s tire. Gordon entered the top-5 for the first time on lap 47 with a move around Dale Earnhardt Jr. Two laps later, Kurt Busch made another reckless move on the track and hit Brad Keselowski in the tri-oval. Keselowski spun onto the apron and collected three drivers including Greg Biffle when he came across the track. The event was red-flagged for track clean-up with Gordon in 3rd place. After a 20-minute delay, racing resumed on lap 55. Gordon fell to 4th on the restart and dropped another spot when Kasey Kahne passed on lap 78. He dropped t0 6th prior to a round of green flag pit stops on lap 88. A caution for David Gilliland’s cut tire on lap 89 trapped Gordon a lap down. However, he took the wave-around to get back on the lead lap.

He restarted 21st and worked his way into the top-20 before a debris caution on lap 108. Gordon stayed on the track and restarted in 9th place. However, he faded to 18th within two laps of the restart. He steadily regained spots and ran 16th at the halfway point of the event. Gordon came to pit road on lap 148 for a green flag pit stop. However, Denny Hamlin’s wall contact brought out the caution. The #24 crew changed two tires and received the free pass to get back on the lead lap. He restarted in 25th place on lap 153 and re-entered the top-20 within 10 laps of the restart. Gordon moved to 15th on lap 180 and ran 13th when a caution for debris slowed the field on lap 195. Gordon came to pit road for tires and restarted 12th. He took 10th from Kevin Harvick with 50 to go and passed Carl Edwards for 9th with 47 to go. Gordon took 8th from Jamie McMurray with 40 to go and took 7th from Kyle Busch three laps later. As the laps wound down, he passed Brian Vickers for 6th with 29 laps to go. A caution for Vickers wall contact with 26 to go brought the lead lap drivers to pit road.

Gordon gained two spots on pit road and restarted in 4th place with 21 to go. He moved up to 3rd when Jimmie Johnson spun in turn 2 after the restart. However, on the restart, Joey Logano dived to the inside of Gordon and dropped the #24 car back to 9th with 16 to go. He moved up to 8th with 11 laps to go, but ran distantly behind the top-5. Gordon posted his first back-to-back top-10 finishes of the season and moved up to 12th in the series points standings.

Turning point
Gordon was on the verge of a top-5 finish if the race stayed green to the finish. However, a caution flag coupled with a quick pit stop thrust Gordon into the top-4 for the restart with 21 laps to go. But on the restart, Joey Logano dove low on the track, which forced Gordon into the middle line resulting in a loss of positions.

JG’s comments
“We had an awesome fast car that is for sure. I think we passed more cars than anybody. These pit stops just aren’t going our way. If we try to stretch it doesn’t work our way. If we try to pit early it doesn’t work our way. I don’t know, you just have to keep working hard at it and hope they fall your way eventually. Pit stops were great when we had them. The car was awesome on the race track. It took a little while for it to come in and that last restart I kind of timed it and the #18 (Kyle Busch) spun his tires and stacked us up, then cars were four-wide. That didn’t certainly work out in our favor.” 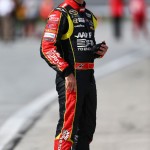 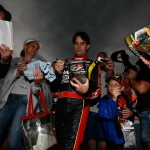 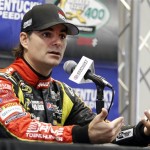 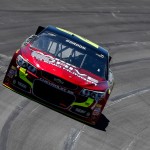 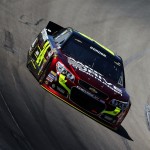 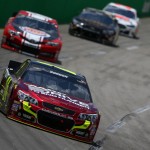