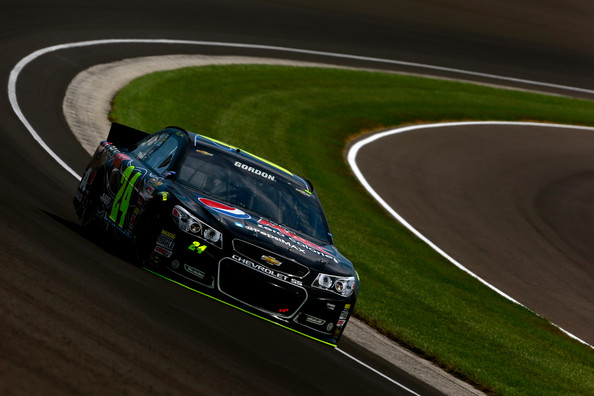 Jeff Gordon’s streak of summer consistency continued with a 7th place effort in the Brickyard 400 at Indianapolis Motor Speedway. It was Gordon’s 4th top-10 finish in the last 5 races. Gordon is now 10th in the series standings — the first time he’s been in the top-10 since Phoenix (second race of the season).

Gordon started 9th and moved around Marcos Ambrose to take 8th in the opening 5 laps. He took 7th from Denny Hamlin on lap 13 and held the spot until a round of green flag pit stops on lap 28. After a 14-second stop, Gordon returned to the race in 9th place. He took 8th from Matt Kenseth at the 100-mile mark and moved into 7th with a pass on Kasey Kahne. He advanced to 6th with a pass on Kurt Busch on lap 50. Gordon took the race lead by staying out during a cycle of green flag stops. Following a caution flag stop on lap 60, Gordon restarted in 8th place. However, he was caught in the outside line on the restart and dropped to 12th on lap 65. The second caution waved at the halfway point when Jeff Burton stopped on the track after breaking a gear. Gordon elected to stay on the track and restarted in 3rd place.

On the restart Gordon dropped to 5th after Dale Earnhardt Jr and Jimmie Johnson went by. One lap later he fell to 7th after Tony Stewart and Matt Kenseth passed. Ryan Newman sent Gordon back to 8th place on lap 90. He came in for a green flag stop on lap 95 and ran 20th following the stop. He advanced to 7th place because he was off the leaders’ pit sequence. A caution on lap 114 brought Gordon to pit road for adjustments. He restarted in 16th place with 100 miles to go in the event. Gordon steadily gained ground and ran 13th on lap 122. Five laps later he moved into 11th place. Gordon cycled back to the lead during the final green flag pit stop sequence with 25 laps to go. He came to pit road for the final time with 21 laps to go and cycled through in 13th place. With 12 laps to go, he advanced to 8th place as pit stops continued. Two laps later, Gordon moved to 7th place.

Turning point
Gordon struggled with handling at times but was unable to get track position where he could contend for a top-5 finish. 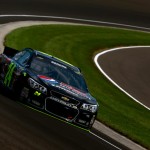 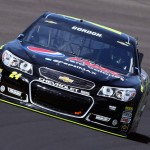 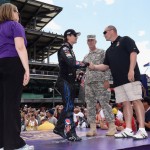