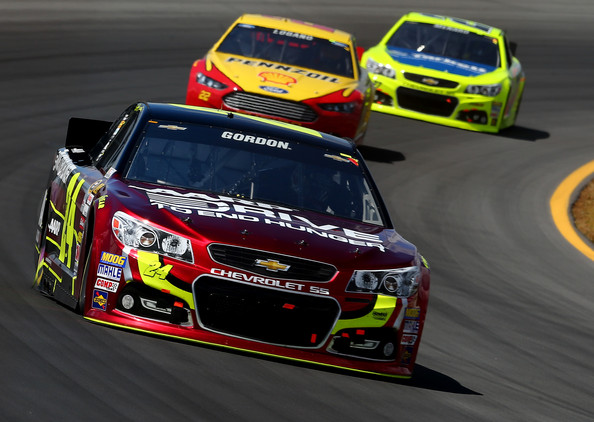 It seemed as if Jeff Gordon’s 88th career victory was on the horizon at Pocono Raceway. Gordon led Kasey Kahne on the final restart, but gave his Hendrick Motorsports teammate the opportunity to use the outside line to power past. Gordon finished second, which tied his best finish of 2013. In addition, he moved up to 9th in the series points standings. “I’ve given away a lot more races than I’ve won,” Gordon said. “I’m happy we were in position. I’m bummed it didn’t work out.”

Gordon started 22nd and took a wide line into turn 1. Juan Pablo Montoya clipped Ricky Stenhouse and sent the #17 car spinning. Gordon was just ahead of the melee and moved up to 19th place. He advanced to 16th by lap 10 and ran 13th when the second caution waved on lap 15 for Denny Hamlin’s wall contact. Gordon restarted 15th following pit stops. He dropped back on the restart and ran 17th on lap 20. As the run progressed, he moved through traffic and ran 12th on lap 26. Gordon entered the top-10 on lap 32 with a pass on Tony Stewart. Due to alternating pit stop strategies, Gordon moved up to 3rd place on lap 38. He assumed the race lead on lap 42 when Kurt Busch came to pit road. Gordon came to pit road one lap later for fuel and tires. Following the stop, Gordon ran in 8th place. He quickly moved to 6th with passes on Paul Menard and Joey Logano on lap 49. A caution on lap 54 for David Gilliland’s wall contact brought some of the leaders to pit road. Gordon stayed out and restarted in 3rd place. He held the spot until a green flag pit stop on lap 72.

The complexion of the event changed on lap 77 when race leader Jimmie Johnson cut a tire and damaged the right side of the #48 car. Gordon stayed out and restarted 3rd on lap 82. He ran behind Kasey Kahne and Brad Keselowski for 15 laps before a caution for David Stremme’s cut tire. The #24 car came to pit road for 2 tires and restarted in 7th place. He slipped to 9th just after the restart on the inside line, but rallied back to 8th prior to a caution for Aric Almoriola’s spin on lap 102. Gordon dove low on the restart to move up to 5th with 53 laps to go. A multi-car wreck involving Danica Patrick, Jeff Burton, and Paul Menard brought out the caution with 50 to go. He passed Kyle Busch for 4th with 39 laps to go. Gordon came in for his final green flag pit stop with 30 to go.

Gordon held the 3rd spot through the cycle of pit stops behind his Hendrick Motorsports teammates Kasey Kahne and Dale Earnhardt Jr. He passed Earnhardt Jr with 22 laps to go, but ran 6 seconds behind Kahne for the race lead. Gordon was aided by a debris caution with 12 laps to go, which allowed him to restart next to Kahne. Gordon was on the inside line as Kahne opted for the outside lane. Gordon took the race lead from Kahne with a pass in turn 3 with 8 laps to go. Matt Kenseth’s spin brought out a caution with 4 laps to go and set up a green/white/checkered finish. Gordon chose the inside lane for the restart.

On the restart, Kahne powered past Gordon in the tunnel turn to take the race lead. Nevertheless, Gordon posted a 2nd place effort — tying his best finish of the 2013 season.

Turning point
Gordon ran distantly behind Kahne in the closing stages. However, a caution flag for debris on the track with 12 laps to go bunched the field and gave him a chance at the victory. He took the race lead, but the final caution for Matt Kenseth’s spin set up a restart. Gordon moved to protect the inside line, which allowed Kahne to power past on the outside.

JG’s comments
“Isn’t it funny how our emotions go up and down in this sport? Going into the race if you told me that I could finish second, I’d say that was a great birthday gift. But when you take the lead from Kasey the way we did on that restart, I thought we had him. He was better than us, but I thought we could hold him off. I got a perfect restart on that last one. I probably jumped him a little bit. I moved out front of him and it looked like I needed to block the inside. So I kind of protected the inside and he blasted up there on the outside. Flat outdrove me thru Turn 1. I’m disappointed that we didn’t get this win. This team has worked so hard to put ourselves in position. A little disappointed, but also excited because it was a good points day for us and we needed that.” 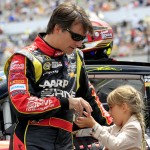 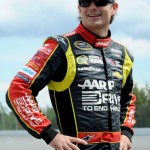 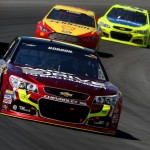 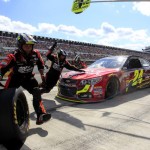 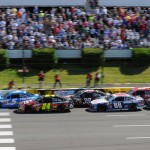 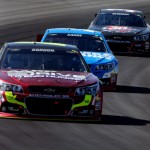