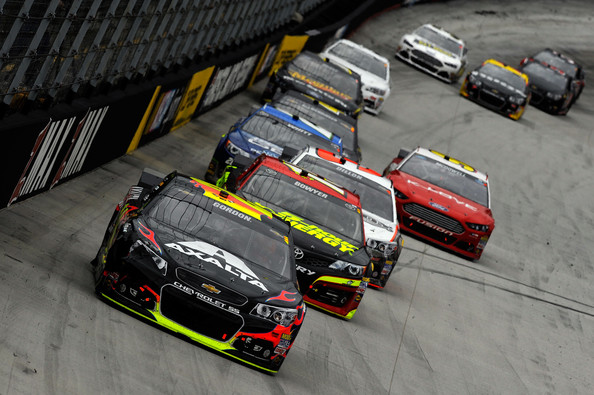 Early afternoon rain delayed the start nearly two hours. Gordon started 6th and moved to 4th within 5 laps. He took 3rd from Matt Kenseth on lap 10. He dropped a spot to Kenseth, but later passed Brad Keselowski to run 3rd at the competition caution on lap 50. Gordon came to pit road for tires. He made contact with David Ragan while exiting his pit stall as Ragan was making his way in. Gordon returned to pit road for repairs to the right front. He restarted 35th on lap 58 and moved to 32nd prior to a debris caution on lap 61. Gordon advanced to 26th by lap 85 as he worked in race traffic. At the 100-lap mark, Gordon ran in 23rd place. Gordon entered the top-20 prior to a caution flag on lap 118 for rain. Gordon came to pit road for tires and exited in 17th place. However, as rain continued, the cars came to pit road for a red flag delay.

After a three-hour red flag for rain, racing resumed shortly after 7pm/eastern time. Gordon dropped to 18th before the caution on lap 155. Cole Whitt spun in turn 1 to bring out the caution. Timmy Hill then inexpicably drove into the rear of race leader Matt Kenseth under caution. He moved up to 15th for the restart due to driver’s opting for pit stops. Gordon fell to 29th prior to the competition caution on lap 188 as he battled handling issues. He came to pit road and restarted in 30th place. Gordon moved forward to 23rd place by lap 210. He re-entered the top-20 just before the halfway point and ran 17th on lap 250.

As the green flag run progressed, Gordon moved through traffic and ran 12th on lap 260. He entered the top-10 on lap 273 before a caution for Ryan Truex’s wall contact. Gordon restarted 9th on lap 285. He took 8th from Brad Keselowski on lap 330, before a caution for David Ragan’s spin. Gordon changed 4 tires and restarted in 12th place. He entered the top-10 within a lap of the restart and took 9th from Denny Hamlin on lap 344. A caution for Kyle Busch’s spin on lap 395 brought out the caution. Gordon came to pit road for tires and restarted in 7th place. He moved to 6th when Matt Kenseth slid up the track and took 5th from Brad Keselowski with 85 to go. The ninth caution waved on lap 422 for Martin Truex’s spin.

Turning point
Gordon was running 4th with 50 laps to go, but opted to come to pit road for tires. He lost track position and was only able to get back to 7th place before the finish. 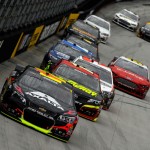 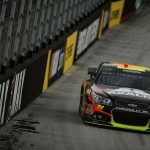 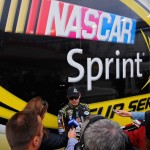