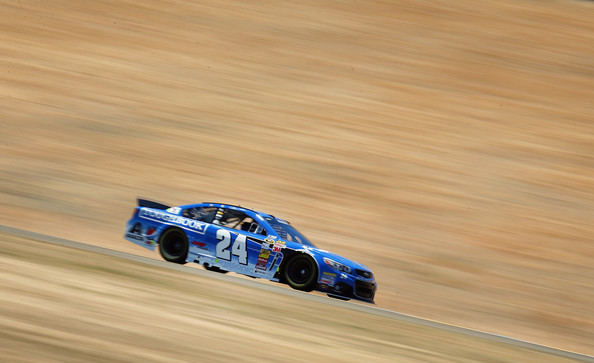 Carl Edwards held off Jeff Gordon in the Save Mart 350 at Sonoma Raceway to claim his first career victory on a road course. Gordon gained 4 spots in the final 20 laps, but was unable to get around Edwards for the win. Gordon remains the NASCAR points leader with a 20 point gap on Jimmie Johnson. It was Gordon’s third runner-up finish in the last 4 races at Sonoma.

Gordon started 15th and dropped to 17th by the end of lap 1. He regrouped and regained the 15th position on lap 4, and took 14th from Brad Keselowski one lap later. Gordon’s forward march continued as he moved to 12th on lap 9 and took 11th from Brian Vickers on lap 12. He entered the top-10 on lap 15 with a move around Joey Logano. He fell out of the top-10 when Jimmie Johnson went by on lap 19, but moved back to 10th by passing Paul Menard on lap 21. Dale Earnhardt Jr took a spot from Gordon on lap 23 prior to the first round of green flag pit stops. The first caution waved on lap 31 for Landon Cassill’s engine, which allowed Gordon to advance up to 6th for the restart because the top-5 hadn’t pitted under green. He entered the top-5 with a pass on Kyle Larson on lap 37, and took 4th from Earnhardt Jr on lap 41. Gordon led 3 laps during a green flag pit stop sequence before he came in for tires and fuel on lap 58. A caution flag on lap 60 jumbled several strategies as race leader Kevin Harvick stayed on the track to attempt the race on just 2 pit stops.

Gordon restarted 14th and moved to 10th within a lap of the restart on lap 65. He took 7th from Marcos Ambrose on lap 67 and moved around Clint Bowyer for 6th one lap later. Gordon re-entered the top-5 on lap 68 with a pass on Greg Biffle, and took 4th from Brian Vickers on lap 69. Gordon passed Kevin Harvick for 3rd on lap 70 prior to a caution. Pit stops followed with Gordon restarting in 8th on lap 74 due to 5 drivers pitting before the caution waved. On the restart he moved to 7th prior to a caution for Matt Kenseth’s wreck into the tire barrier on lap 75. The field stayed under caution for 4 laps before restarting on lap 79. He moved up to 6th before a caution for Bowyer’s spin which collected Harvick on lap 82. On the restart with 25 to go, Gordon took 4th from Johnson in turn 3, but dropped the spot at the end of the chute. With 20 to go, Johnson was held up trying to take a spot from Marcos Ambrose, which allowed Gordon to slip by in the esses to take 4th. A caution for Ricky Stenhouse’s spin brought the field closer for the restart with 16 to go. He took 3rd from Ambrose with 13 to go and closed on Carl Edwards and Jamie McMurray for the race lead. Gordon moved to 2nd with a pass on McMurray with 9 laps to go, but was unable to track down Edwards for the victory.

Turning point Gordon was able to get around Johnson on a late race restart, which put him in position to challenge for the victory.

JG’s comments “With 5 or 6 laps to go, I was making some ground up on Carl. I was really good in the fast sections, he was pretty good in the slower sections. I was just having to hit everything so perfect. I overdrove it into turn 4 one time and went real wide. That gave him enough of a gap.” 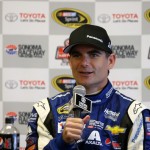 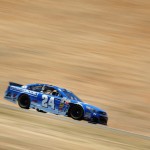 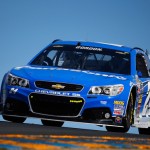