You are here: Home / Archives for auto club 500 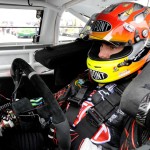 February 22 – – The In-N-Out fast food chain is one of the most popular stops for the NASCAR teams on visits to Southern California.  Unfortunately for Jeff Gordon, In-N-Out described his engine in the last 75 laps of the Auto Club 500 in Fontana, California.   Gordon was running 4th when his engine began missing.   He wound up finishing 20th in a race won by his Hendrick Motorsports teammate Jimmie Johnson.

Gordon started 28th and worked his way into the top-20 within four laps.  He steadily worked through traffic and ran 16th on lap 11.  Gordon took 12th from Jamie McMurray on lap 21, and entered the top-10 on lap 30 with a pass on Mark Martin.  Two laps later he climbed to 8th.  Gordon came to pit road on lap 39 for a green flag stop.  When stops cycled through, Gordon ran 6th on lap 44, but slipped to 8th just three laps later while battling a loose condition.  A debris caution on lap 59 brought the field to pit road.  Gordon opted for four tires and departed in 5th place.

Gordon dropped back to 10th on the restart after getting squeezed on the inside line.  After the field became strung out he regrouped and took 8th from Greg Biffle on lap 65.   However, a back and forth battle with Biffle moved Gordon up the track and back to 10th.  Gordon came back and passed Biffle for 9th on lap 68, before Biffle returned the favor one lap later.  Gordon patiently moved around traffic and ran 7th on lap 80.  He used the high line in the corner to take 6th from Juan Pablo Montoya on lap 86.  Kasey Kahne’s spin on lap 93 brought the caution and the leaders came to pit road.  Gordon exited pit road in 4th place, but once again lost spots on the inside line and ran 11th at lap 100.  At the halfway point, Gordon ran in 9th place – distantly behind leaders Kevin Harvick and Jimmie Johnson.

A caution for Montoya’s engine brought the caution and the field to pit road on lap 139.  However, Gordon stayed on the track and collected a 5 point bonus for leading.  On the restart, Gordon chose the outside line and maintained the top spot until Ryan Newman blew an engine on lap 147.  He lost the lead on the restart as Jeff Burton and Kyle Busch went by on lap 154.  With 90 laps to go, Johnson went around Gordon to take 3rd place.  Gordon battled back and took 3rd from Johnson with 88 to go.   Trouble began with 75 laps to go when Gordon radioed about an engine problem.  He slowed dramatically and came to pit road with 72 laps go with the oil temperature rising.   The caution waved for rain with 70 to go and Gordon moved up to 4th due to drivers coming to pit road for fuel.   The field ran under caution for nearly 20 minutes before the green flag waved with 50 laps to go.

The engine once again produced problems and Gordon faded back in traffic until the engine picked up again.  With 35 laps to go, Gordon dropped back to 21st position as the engine was down a cylinder.  One lap later, Gordon came to pit road for tires.   Crew chief Steve Letarte speculated it was likely a spark plug problem with the car.   Gordon restarted in 25th place with 20 to go.  He moved around slower cars and up to 18th with 11 laps to go, before dropping two spots on lap 241.  Gordon finished the event in 20th.  The last time Gordon started a season with two sub-15th place finishes was 1996. 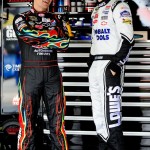 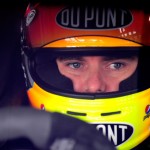 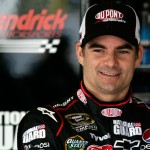 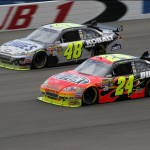 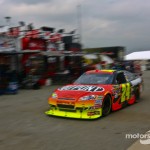 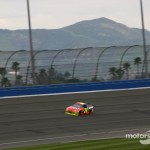 Jeff Gordon’s winless drought will continue at least for another week, but his runner-up finish to Matt Kenseth in the Auto Club 500 at California Speedway showed that his race team has made significant strides on the downforce tracks over the off-season. “We certainly are going to win if we put cars out there like this,” Gordon said. “We still have a little bit of work to do but I’m excited because we ran so good. We made an adjustment that made my car just a little too tight at the end.” Gordon started 6th, ran in the top-three virtually all night, and led significant portions of the mid-late stages of the race. However, he was beaten off pit road by Kenseth with 35 laps to go. Gordon had called for a handling adjustment that made the car too tight on the final run. Although he closed in on Kenseth as the laps wound down, he was unable to get around the leader. Nevertheless, the runner-up finish thrusts him up to 2nd in the series standings and gives the team something to build on heading to Las Vegas next weekend.

Watch Jeff and Matt Duke it Out in the Final Laps

Stuck at work or away from a radio or tv?  You can follow all the action on these sites:
Fox Sport’s Racetrax.
Nascar.com Leaderboard
Yahoo.com Live Chat and Leaderboard
[ad#blog-post-ads] 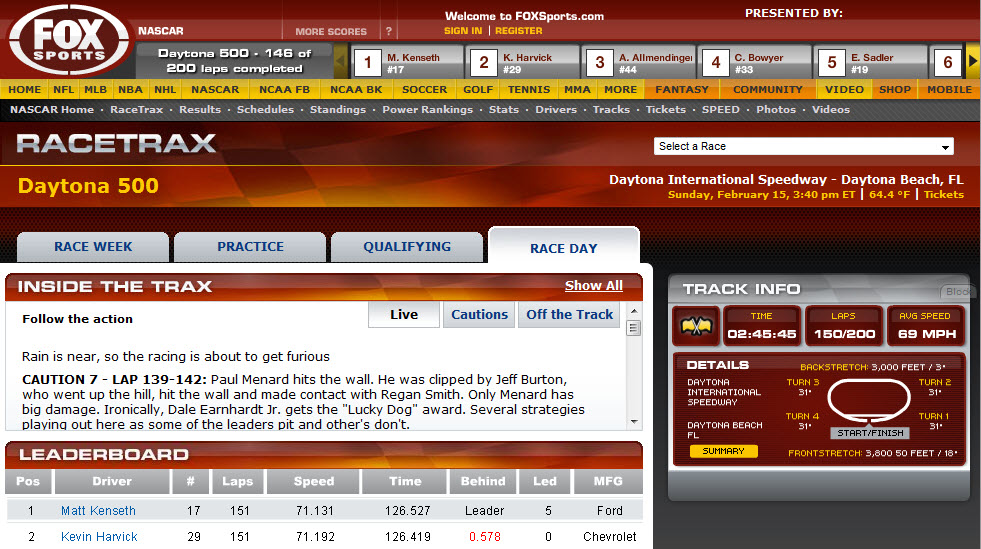