You are here: Home / Archives for championship 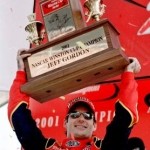 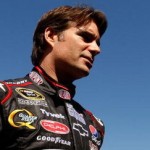 When Jeff Gordon climbed out of his sleek, shiny Dupont Chevy after finishing second to Matt Kenseth in the Fontana race, team owner Rick Hendrick took one look at his driver and he knew. The gleam, that special gleam of excitement and confidence, was back in Jeff Gordon’s eyes once again.

Hendrick, seeing the spring back in the step of Gordon, made a promise not only to Jeff’s fans but to all who would listen. His veteran four-time champion would win this year, not just one race win but would win “multiple races,” according to Mr. H.

Whether the failure was on the part of the driver, crew chief, team or company, all would agree that 2008 was a less than stellar one for the No. 24 race team. Rick Hendrick admitted that “we were just not good enough for that team and I feel like we just let them down.”

Gordon has also publicly taken responsibility for the woes of the past year. He recently revealed that his back had been bothering him since the 2007 season.

The back pain and spasms were worse when he was running long races. He admitted that the pain broke his concentration and made it difficult for him to effectively wheel the car to the end of the race.

It took the cajoling of his wife Ingrid for Gordon to begin to address his back pain. At her urging, Jeff has now started to get into shape, work with a personal trainer, and has someone at the track to help him deal with his back pain prior to race day.

Gordon also shared that last year was one of adjustment, especially to his role as a new dad. As every parent can attest, he was suffering from lack of sleep and solid rest, another factor affecting his performance on the track.
[Read More]

For the last 17 seasons, NASCAR fans have watched Jeff Gordon grow up in front of their eyes.

Since winning his first Cup championship in 1995, Gordon’s voice has held authority. When outspoken, his arguments are calculated and smoothly delivered. When he or his team’s ability or determination is questioned, the response remains positive and upbeat.

Sunday night’s postrace comments by the second-place finisher at Auto Club Speedway carried a similar tone, yet with an enthusiasm that was so genuine it was apparent that the old Jeff Gordon was back.

Gordon graciously congratulated winner Matt Kenseth, but the confidence of the four-time champion beamed with the expectation that a fifth title could be just 34 races away.

“We were awesome in every way tonight with this DuPont Chevrolet,” Gordon said.”I’m really excited on one side and I’m really upset on the other because I felt like we had an opportunity to win this race.”

Gordon not only had an opportunity to win the Auto Club 500, he skillfully picked off one car at a time beginning with his teammate Jimmie Johnson on Lap 78 after the No. 48 Chevrolet had dominated by leading 74 laps prior to being passed in Turn 2.

[Read the rest of the story]