You are here: Home / Archives for crash 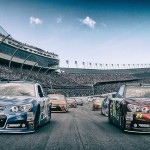 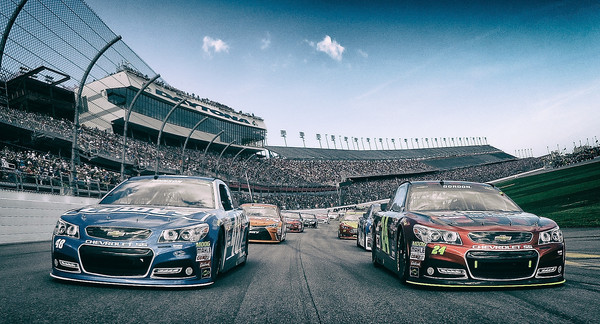 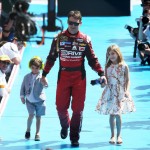 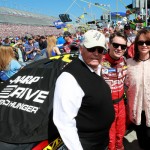 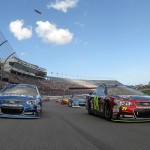 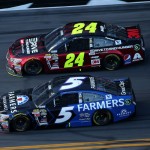 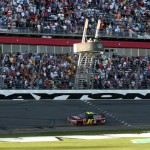 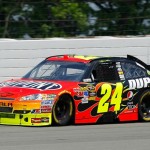 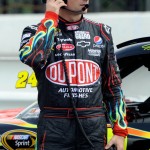 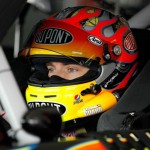 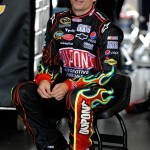 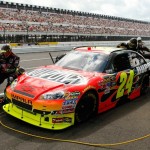 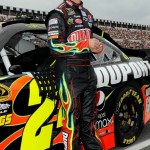 During the Green-White-Checkered, a multi-car crash happens after Jeff Gordon bumps Greg Biffle.

Kevin Harvick wins the 2010 Budweiser Shootout for the 2nd year in the row.

Check out the carnage from the “Big One” at the Aaron’s 499 at Talladega. 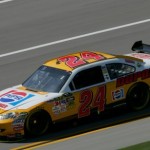 April 25 – – It should have stayed in mothballs. In the first race for the Pepsi Challenger in 1983, Darrell Waltrip drilled a dirt bank at Daytona Internaional Speedway, careened back on the track and hit the retaining wall. Twenty-six years later, Jeff Gordon’s day in the Pepsi Challenger was hindered by the same effect — a major wreck on the track. Gordon was involved in a lap 7 wreck at Talladega Superspeedway after being clipped by Matt Kenseth. The front and rear of the car was destroyed. Repairs were made and Gordon finished in 37th. He dropped to 2nd in the series points standings.

IS THERE ANY CHANCE YOU CAN GET THE CAR BACK OUT? “I think this is the same way this Pepsi Challenger ended up in ’83. So it sure didn’t look good. It was driving good. We were having a good time there. I was actually working well with Matt (Kenseth) getting up to the front through the middle. I am not really sure what happened. I was just kinda cruising along there in the middle. Matt got up there, I think behind, maybe the No. 11 and he went low and so I was just cruising on up the middle.

“Matt went down with the No. 1 car and I guess what it was, whoever that was on the inside, I don’t think, there just wasn’t enough room. He got underneath Matt, Matt came up and I was already there.

“The car is destroyed. That is Talladega. I don’t know if we are going to be able to fix that. I know these guys are going to work real hard to try and get it back out there and get some points. Just unfortunate.

“There are so many different grooves to race out there. Matt went low so I was just going to go up the middle, it had been working so well for us up to that point. Somebody got to the inside him and closed the door.

“Things were going well, we were having a good time. Just cruising up the middle. Matt got hooked up with the No. 1 car. They started to go low and I think somebody got inside of them just as I was getting to the outside or up the middle of Matt. I don’t if he knew I was there, didn’t know I was there or what happened. But, I just got squeezed and started a big wreck.

“I didn’t see anything out of line. There was nothing. I don’t think that wreck was caused by over aggressive driving. I mean, every race and every wreck I look to see what I could have done different. Looking back on it, I wish I would have just stayed behind Matt. But that is always hindsight. We’re sitting here. It is unfortunate. It is not obviously going to be the day we were looking for.” 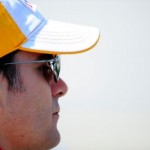 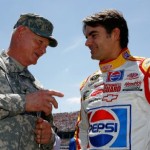 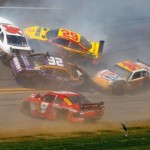 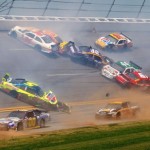 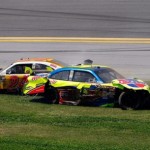 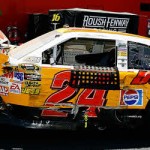 Carl Edwards comments on the the final lap of the Aaron’s 499.  Edwards goes on to say that someone will get killed before Nascar changes the double yellow line rule.  Edwards blocked Keselowski coming to the checkered flag which resulted in Edwards getting turned around and flipped airborne into the fence in spectacular fashion by Ryan Newman.  There were 8 minor injuries to fans in that area of the crash.

Here is the call from Fox as it occurred: