You are here: Home / Archives for Crown Royal Presents the Matthew & Daniel Hansen 400 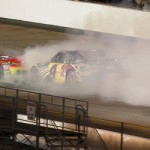 Jeff Gordon started 6th and was hooked up from the ouset as he moved to 3rd on lap 10. However, Gordon battled a loose handling condition going into the corner and was unable to make headway toward the lead. He dropped to 4th at the 70-lap mark and fell to 5th when Kyle Busch passed. He came to pit road for a green flag stop on lap 89 and cycled through in 9th place. At the first caution flag on lap 104, Gordon was up to 6th. Gordon’s handling improved after a pit stop and he took 3rd from Clint Bowyer on lap 120. Shortly before the halfway point, Kurt Busch’s wall contact brought a caution to slow the field. Gordon came to pit road and exited in 3rd behind Kyle Busch and Denny Hamlin. On the restart he moved to 2nd behind Busch. Gordon briefly took the race lead for 3 laps before Busch re-assumed the top spot on lap 205. A caution on lap 236 brought Gordon to pit road for a track bar adjustment. He lost positions battling a loose car and returned to pit road 15 laps later when Jimmie Johnson wrecked Joey Logano. With 100 laps to go, Gordon ran in 5th before a caution for Brad Keselowski’s spin. After pitting, Gordon restarted 12th and was the victim of a wreck on the backstretch when Matt Kenseth got turned. Gordon spun across the track and slammed the inside wall on the backstretch. He climbed from the damaged car under his power and was credited with a 39th place finish — his worst finish since Michigan in August 2008.

Road ahead: The series heads to the 1.36-mile Darlington Raceway for a Saturday night affair. Gordon’s performance on intermediate tracks has been an uphill climb in 2011. However, Darlington is far from the typical intermediate track with its narrow and abrasive racing groove.

WHAT HAPPENED OUT THERE?

“It knocked the wind out of me. I just saw the corner through my mirror, a car come into my left rear, and around I went in a hurry. I was hoping that I spun quick enough that I wasn’t going to spin to the inside wall. And then I hit really, really hard. I’m just so proud of these guys on the DuPont Chevrolet. We had an awesome race car tonight. I don’t know if we had a car capable of winning, but we were certainly going to give it a heck of a try and we certainly had a top-five car pretty easy. So, I hate it with the pit sequence and the pit strategy that was going on there that we lost all that track position. With 100 (laps) to go and everyone was just getting so impatient; you had to dive in there three-wide. I don’t know what happened behind me but somebody shot up and got my left rear and around we went. I must have hit the corner of that inside wall. Again, I wish they had a Safer barrier there. I seem to be able to find the ones without the Safer barrier. But what a shame, man.”

YOU SAID EVERYONE WAS LOSING THEIR PATIENCE OUT THERE INCLUDING YOU, IS THERE A LOT OF BEATING AND BANGING GOING ON OUT THERE?

“Well, there is 100 to go. I think it is a little early, but any time you have cars that stay out, cars that take two, cars that take four, they are going to be diving in there taking it three wide. I was having to do it to. I’m sure not blaming anybody else. Just kind of the circumstances when we’re like that. I just think that we got the bad end of it.”

“I know. I don’t know what it is. I’m not trying to teach anybody anything. I really am not. I think it is pretty well known we need safer barriers everywhere. You think it is a short track and everything but man, I hit a ton and hit right on the corner where you don’t want to hit. It definitely got my attention. That is for sure. It rang my bell.”

When there was a chance.