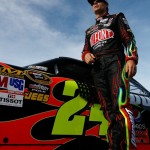 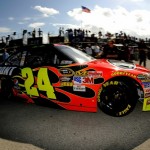 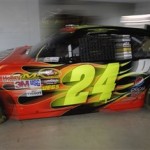 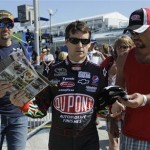 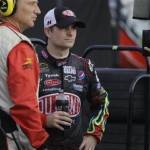 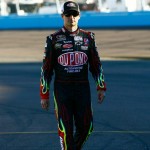 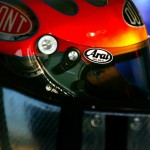 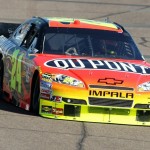 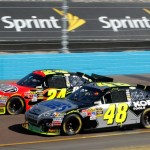 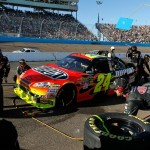 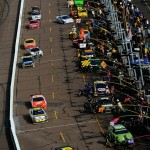 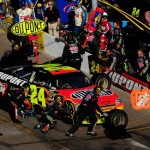 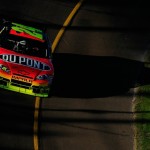 Jeff Burton wrecked Jeff Gordon under caution at the AAA Texas 500 @ the Texas Motor Speedway.  A brief altercation outside of the race cars ensued on the race track.  You’ve probabaly never seen Gordon this angry after being wrecked! 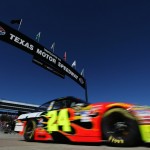 November 8 – – Jeff Gordon’s frustration boiled over in the late afternoon sun at Texas Motor Speedway. After battling handling issues for the balance of the day, Gordon was wrecked during a caution period by Jeff Burton in turn two on lap 191. The drivers exited their cars and had a brief melee before being separated. Gordon sustained his 3rd DNF of the season and finished 37th.

Gordon started 15th and moved to 14th by lap 10. The field was slowed by a caution flag for Joe Nemechek’s engine on lap 12. Pit stops followed with Gordon opting for two tires. He restarted 8th on lap 17 and immediately jumped to 6th. However, he dropped to 7th on lap 27 as his lap times began slowing. Jimmie Johnson passed Gordon to take a position on lap 35. He fell to 10th on lap 37 when Paul Menard and Kyle Busch went by. A debris caution on lap 43 slowed the field and allowed Gordon’s crew to make chassis adjustments on pit road. Gordon changed four tires and gained two spots in the pits. He lost those spots immediately after the restart as his handling woes continued.

Gordon dropped to 12th on lap 50 unable to advance forward. A caution for Sam Hornish’s wall contact on lap 59 slowed the field. Gordon changed tires and restarted 17th on lap 64. He moved up to 15th within three laps of the restart. Kevin Harvick sent him back to 16th on lap 71. He followed Harvick through traffic and ran 14th on lap 90. He moved back into the top-10 on lap 105 with a pass on Elliott Sadler. Gordon came to pit road for a green flag pit stop on lap 111. Following the stops, Gordon ran in 14th place. Martin Truex’s spin on lap 132 brought the field to pit road. Gordon restarted in the top-10 but dropped back a few laps after the green flag. He faded to 15th by lap 150 when the caution waved for Truex’s cut tire. Pit stops followed and Gordon restarted 18th on lap 156. Gordon masterfully held his line and avoided Kyle Busch’s spinning car one lap after the restart. He spent the next 25 laps running in 20th place.

On lap 191, Jeff Burton drilled Gordon from behind sending him into the wall. Gordon exited the car and jogged across the track to the safety vehicle. He shoved Burton with both hands and unloaded with a right hand. Burton took the blame for the incident in a TV interview, which was little consolation to Gordon. “He went wide in turn three, I got to the inside and he drove into me,” Gordon said. “Then the caution came out. We went into turn one and I guess he was frustrated and drove in my right rear and put me in the wall.” Gordon slipped to 6th in points and will be mathematically eliminated from title contention next week at Phoenix. Although that’s merely for posterity since his focus had shifted to 2011 a few weeks ago.

After the wreck, Gordon’s pit crew was called over to Johnson’s pit stall as crew chief Chad Knaus elected to replace his entire crew. Gordon’s crew pitted Johnson’s car for the remainder of the day — turning stops a full second quicker than the 48 team had previously done earlier in the event. 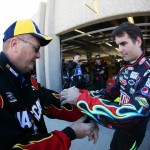 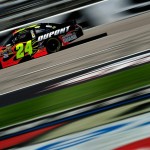 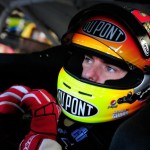 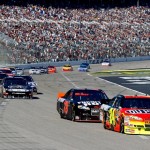 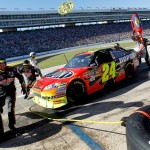 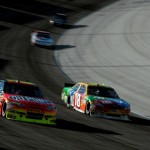 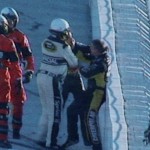 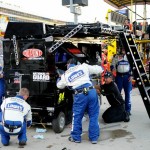 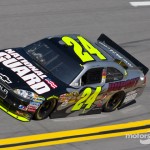 October 31 – – If Jimmie Johnson wins his fifth NASCAR title in three weeks by less than 20 points, he can credit his teammate Jeff Gordon for an assist with a push in the final stages at Talladega Superspeedway. As Clint Bowyer and Kevin Harvick dueled for the race victory, Gordon stayed glued to Johnson’s bumper and pushed him through traffic to ensure a top-10 finish.

Gordon started 31st and moved to 24th by lap 2 with drafting help from Kyle Busch. However, he dropped out of line and fell to 36th on lap 5. Gordon drafted with Jimmie Johnson distantly behind the lead back in 27th place for nearly 15 laps. Gordon came to pit road for a green flag pit stop on lap 40. Gordon cracked the top-10 for the first time after the stops as he ran in 9th place. He moved to 7th with drafting help from Busch on lap 44. Gordon soon faded back with Johnson to avoid the tight drafting pack. Gordon ran in a line with Johnson and Denny Hamlin for 5 laps as the trio ran in the mid-20’s. The first caution waved on lap 70 for AJ Allmendinger’s spin following contact from Brad Keselowski.

Gordon gained 6 spots on pit road and restarted 19th on lap 74. Within a few laps, he dropped back to 26th in a drafting line with Johnson and Busch. At the halfway point, Gordon ran 27th in a line behind the lead drafting pack. He pitted under green for right side tires on lap 114 and returned to the drafting line in 9th place. Once again, he dropped back into the mid-20’s before the second caution waved with 55 laps to go. Dale Earnhardt Jr bump drafted Jeff Burton in turn 3, which resulted in Burton getting loose and taking both himself and Earnhardt Jr into the wall. Pit stops followed with Gordon opting for four tires. He restarted 24th after topping off the fuel before the green flag with 50 to go. Two laps later, Marcos Ambrose spun and collected Kevin Harvick and Bill Elliott. Gordon held his line on the low side of the track to avoid the wreck. He came to pit road for tires and restarted 8th with 43 laps to go.

He dropped back in traffic to run in the mid-20’s, within a distance to draft with Johnson in the closing stages. However, Gordon hooked up in a draft with Greg Biffle and moved up to 16th with 22 laps to go. He fell to 20th on lap 168 as Johnson lurked just behind him. With 16 laps to go, crew chief Chad Knaus ordered Johnson to make his move. On cue, Gordon dove to the inside with Johnson locked in a tight draft behind him. With 13 to go, Gordon and Johnson entered the top-5 on the low line. Gordon took the race lead on the backstretch with 12 laps to go — due entirely to Johnson’s drafting push. However, one lap later, Gordon slowed on the track with engine problems. A debris caution with 10 laps to go slowed the field with Gordon reporting the engine was running better. With 3 to go, Johnson fell back and Gordon provided drafting help thus allowing Johnson to keep his momentum. Johnson finished 7th — two spots ahead of Denny Hamlin which allowed him to extend his points lead. Gordon finished 8th after a wreck on the final lap slowed the field. It was Gordon’s first top-10 at Talladega since he won in October 2007. However, Gordon’s focus has now shifted to 2011 as he trails by 207 points with just 3 races to go in the season. 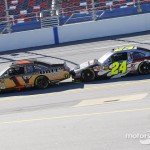 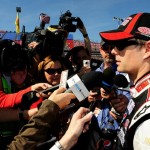 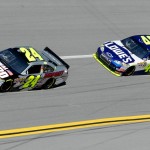