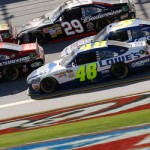 Jeff Gordon started from the pole and hooked up in a tight draft with Mark Martin. The duo moved ahead of the field and Gordon led the first 9 laps. The pair was overtaken by Denny Hamlin on lap 10. Gordon and Martin dropped to 32nd and 33rd after making a swap among themselves. They worked their way up to 27th before Landon Cassill hit Brian Vickers on the backstretch to bring out the caution flag on lap 28. Gordon came to pit road out of sequence with Martin and restarted near the rear of the field. Gordon and Martin ran in 25th/26th for most of the next 50 laps. A multi-car wreck in turn three on lap 90 eliminated Brad Keselowski, Kasey Kahne, David Ragan, and Trevor Bayne. Gordon and Martin ran together in 25th before a debris caution with 60 laps to go. Gordon and Martin ran well behind the next incident with 49 laps to go when Kyle Busch spun and collected Matt Kenseth. The pair moved up to 15th/16th with 35 laps to go. Gordon restarted 21st with 20 to go. With 15 laps to go, Martin pushed Gordon up to the top-5. After Ryan Newman’s spin slowed the field, Gordon restarted 3rd with Martin in 5th with 11 laps to go. On the final lap, Martin pushed Gordon to the lead on the backstretch, but Clint Bowyer edged ahead on the upper groove. Gordon implored Martin to protect the bottom of the track, but his teammate was unable to do so. As they exited turn four, the combination of Jimmie Johnson and Dale Earnhardt Jr moved to the low line and edged ahead of Gordon and Bowyer at the finish line. Gordon posted his third top-5 finish of the season with the 3rd place effort.

Road ahead: After an off-weekend for Easter, the series will head to the .75-mile Richmond International Raceway. Gordon’s pre-season test notes from Pikes Peak — as well as the Phoenix victory — should bode well for the Richmond chassis set-up. 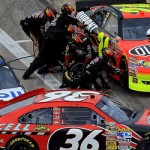 After starting 32nd, Jeff Gordon took two tires on the first pit stop on lap 9 to gain 8 positions. He restarted 24th but fell back to 29th within four laps. A caution on lap 45 allowed the DuPont team to make chassis adjustments. Gordon was unable to make significant headway and additional adjustments came under caution on lap 113. As the night sky enveloped the track, Gordon moved to 22nd on lap 160. However, he went a lap down less than 20 laps later as the handling woes continued. A caution on lap 208 allowed Gordon to get back on the lead lap by staying on the track. He lost the lap during a long green flag run, and went another lap down on lap 226. He made the lap up trying to stretch the fuel to the end of the event, but ran out on the backstretch of the final lap. Gordon finished a difficult night in Texas in the 22nd position.

Road ahead: The series heads to Talladega Superspeedway — which should resemble the Daytona 500 with two-car drafting partners hooking up for extended periods of time. Gordon qualified on the outside of the front row at Daytona. His restrictor plate program for Talladega should be strong. However, plate racing often comes down to drafting partners and avoiding the multi-car melee(s).

Your Killing Me, all giggles! 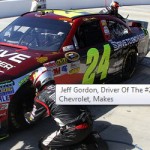