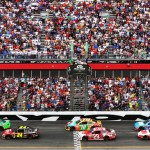 Jeff Gordon started on the inside of the first row and moved ahead of polesitter Danica Patrick coming off turn 2. He led a single-file line under the first caution for debris on lap 27. Gordon came to pit road and opted for a two-tire change to hold the top spot. On the restart, Gordon moved up to the outside line to draft with his Hendrick Motorsports teammate Kasey Kahne. He lost the lead on lap 31 when Jimmie Johnson went by on the low line. Gordon slipped in line just ahead of Kahne in 4th place. That turned out to be an advantegous spot when Kyle Busch and Kahne made contact on lap 33 while running 5th and 6th. Kahne spun sideways and collected Juan Pablo Montoya. The ensuing melee collected Tony Stewart, Kevin Harvick, Jamie McMurray, Casey Mears, and Brad Keselowski (who collected minor damage to the front of his car).

Gordon remained on the outside line when racing resumed. At the 100-mile mark, he ran in 6th place. He moved to 4th place in a single-file line on lap 42. He remained there until a cycle of green flag pit stops on lap 72. Following stops, Gordon ran 5th in a single-file formation. A debris caution slowed the field on lap 83. Gordon came in for fuel and returned to the event in 7th place. On the restart, Gordon slipped back to 15th place on the high line. At the halfway point, Gordon ran single-file in 14th place. As his water temperature increased, Gordon moved to the inside line and dropped to 19th place on lap 109. Three laps later, he ran in 26th place. He came to pit road for a green flag pit stop on lap 130. Seven laps later, Gordon dove low sneaked through a multi-car wreck on lap 137 which eliminated Carl Edwards, Trevor Bayne, Terry Labonte, Josh Wise, David Ragan, Austin Dillon, and David Gilliand. Gordon restarted 14th on lap 146 and moved into the top-10 by lap 149.

Gordon ran 6th in single-file with 50 laps to go. He took 5th when Kyle Busch dropped off the pace. Gordon came to pit road for a scheduled two-tire change under the green flag on lap 173. A caution flag for Jeff Burton’s crash slowed the field on lap 178 with Gordon in 10th place. On the restart with 19 to go, Gordon held the outside line behind Danica Patrick and moved to 4th place. However, the inside line, led by Jimmie Johnson gained momentum and created side-by-side racing at the front of the field. Gordon was caught in the middle line with 12 to go and dropped back to 12th place behind Joey Logano. Gordon moved up to 9th before a debris caution with 9 laps to go. On the restart with 6 to go, Gordon moved to the middle and pushed Logano. However, he wound up getting pinned in a 3-way situation before clearing two cars. With 3 to go, Gordon lost momentum on the inside line and dropped outside the top-20. He sustained minor damage on the final lap trying to avoid a melee coming off turn 2. Gordon has just 1 top-10 finish in his last 8 starts in the Daytona 500.

Turning point
Gordon was shuffled back in traffic after the final restart with 6 laps to go. He pushed Joey Logano, but wound up losing momentum on the low line and faded beyond 20th place.

JG’s Post-Race Comments
“It’s pretty frustrating for us. We were in a great position at the start of the race, lost track position, got it back, and felt like we were in a great position to get a top-5 if not a win and battle for it up there. Our car was awesome. Just those last couple of restarts, the lane that we were in just didn’t go anywhere. We tried. We tried up the middle and down the bottom. That top lane just seemed to be the way to go. We tried hard but it certainly didn’t pay off for us. Pretty frustrating way to end it for us. I know were were a lot better than that. But, a lot better than last year. So we’ll take this, go on to Phoenix. I’m really excited about this new Chevy SS and getting to a short track — or at least a 1-mile racetrack like Phoenix.” 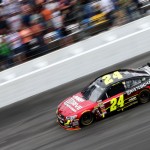 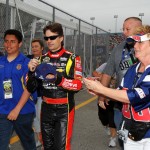 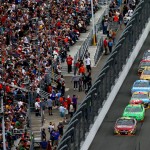 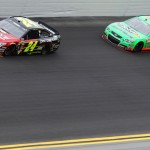 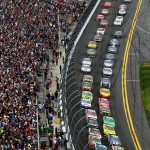 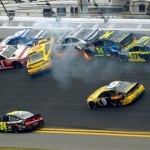