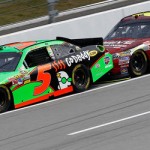 Clint Bowyer edged Jeff Burton at the finish line to win the Good Sam 500 at Talladega Superspeedway. Bowyer eased around his Richard Childress Racing teammate in the tri-oval coming to the finish. Jeff Gordon’s day took a turn for the worse with 9 laps to go when he lost his drafting partner Mark Martin in a wreck. From there, Gordon was hung out to dry with 2 laps to go and finished 27th. It was Gordon’s 5th finish of 20th or worse in the 7 Chase races.

Gordon started 5th and immediately dropped to the inside to hook up in a draft with Mark Martin. The duo dropped to the rear of the field and ran 37th/38th by lap 4. They moved up to 31st/32nd on lap 20. A debris caution on lap 24 brought the field to pit road. When the green flag waved, Gordon once again found Martin and ran in 25th on lap 40. The second caution waved on lap 67 for Joey Logano’s cut tire, while the third came on lap 80 for Ryan Newman’s spin. During the green flag laps, Gordon remained toward the rear of the field in a draft with Martin. A crash on lap 103 triggered by Marcos Ambrose and AJ Allemdinger collected Kyle Busch, Kevin Harvick, and Juan Pablo Montoya, among others.

With 70 laps to go, Gordon and Martin moved into the top-20. Gordon stayed out under caution with 65 laps to go and led a lap before pitting. The pair moved back into the top-20 with 50 to go, and moved into 16th/17th with 45 to go. Andy Lally’s crash with 29 laps to go brought out the caution and the field pitted for the final time. With 18 to go, Gordon and Martin ran nose to tail with their Hendrick Motorsports teammates Dale Earnhardt Jr and Jimmie Johnson. Gordon moved to the outside with 16 to go with a push from Martin. With 15 to go, Bobby Labonte spun off of Michael Waltrip’s bump draft and collected Kurt Busch in a turn two wreck. The green flag waved with 10 laps to go with Gordon in 15th place. Gordon moved to the middle and sliced into the top-10 with 9 to go. With 8 laps to go, Martin got loose in the corner and collected Regan Smith. The left front damage on Martin’s car eliminated him as a drafting partner for Gordon, who narrowly missed being taken out by Smith’s car after it came across the track.

On the restart with 2 laps to go, Gordon was pushed ahead by Trevor Bayne. Gordon moved high and was left out of the draft as Matt Kenseth pushed Bayne ahead. Gordon, without a drafting partner, fell to 20th at the white flag. He crossed the line distantly behind in 27th place.

Road Ahead: The series makes its annual fall visit to Martinsville Speedway. Over the years, Martinsville has been one of Gordon’s most successful venues. In 37 career starts, he has 7 wins and 30 top-10 finishes.

Jeff in the pits