You are here: Home / Archives for Toyota/Save Mart 350 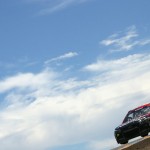 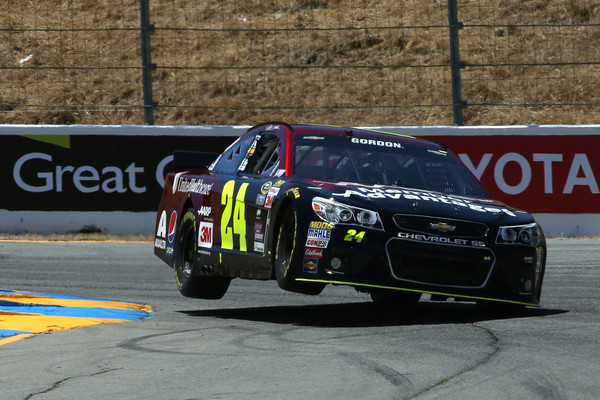 After qualifying in the top-5, Jeff Gordon entered the Save Mart 350 with high hopes of scoring his first win of the season. However, after battling handling issues, Gordon finished 16th. It was just his third finish below 9th place in the last 21 races at Sonoma. The finish snapped his streak of 9 consecutive top-10’s at Sonoma.

Gordon started 5th and took 4th from Matt Kenseth on lap 4. He took 3rd from Kyle Larson on lap 8 but was unable to close on Kurt Busch and AJ Allmendinger at the front of the field. The first caution waved on lap 22 for David Gilliland’s crash. Gordon followed the leaders to pit road and restarted in 11th place after several drivers stayed out. He slipped to 12th prior to the next caution on lap 28 for Martin Truex’s crash. He moved up to 10th when two drivers came to pit road. On the restart he took 9th from Kyle Larson and moved to 8th on lap 34 with a move around Brad Keselowski. Gordon took 7th from Justin Allgaier on lap 35 and advanced to 6th by passing Jamie McMurray. He re-entered the top-5 by passing Ryan Newman on lap 40. However, after battling handling issues, he fell to 7th on lap 45 when Kevin Harvick and Dale Earnhardt Jr. went by. His struggles continued as Kyle Larson and Kasey Kahne passed on lap 50. After David Ragan took a position, Gordon came to pit road for a green flag stop on lap 51. When the cycle of stops was completed, Gordon ran in 11th place.

The third caution waved on lap 74 for JJ Yeley’s crash. Gordon came to pit road for adjustments as spring rubbers were pulled out of the right rear. Gordon restarted at the rear of the field because of a pit crew penalty for throwing equipment. He advanced to 25th when David Ragan and Carl Edwards wrecked on lap 78. Gordon worked his way back into the top-20 with 16 laps to go. He ran 18th when the caution waved with 12 laps to go for Casey Mears’ broken axle. Gordon stayed on the track and restarted in 3rd place behind Jimmie Johnson and Jamie McMurray with 8 laps to go. On the restart, Gordon held 3rd until Kyle Busch took a spot in turn 11. Clint Bowyer took a spot from Gordon with 5 laps to go. Kurt Busch dropped Gordon to 6th. One lap later he fell to 8th when Kevin Harvick and Joey Logano went by. With 3 laps to go, he fell out of the top-10 when Kasey Kahne and Ryan Newman passed. Gordon faded to 13th with 2 to go, and finished the event in 16th place.

JG’s comments
“We had to make some big adjustments and lose track position, but the car was really good there at the end. “It was a great weekend. Nothing’s going to take away from this weekend for me. I know it wasn’t the finish we all wanted, but it was fun to hang out with some of my friends. I hate that we weren’t a little bit better. The (ending), that was just taking some risks on the last pit stop. We didn’t have anything to lose.” 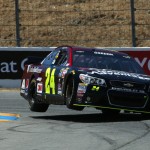 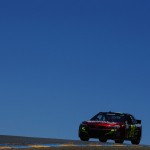 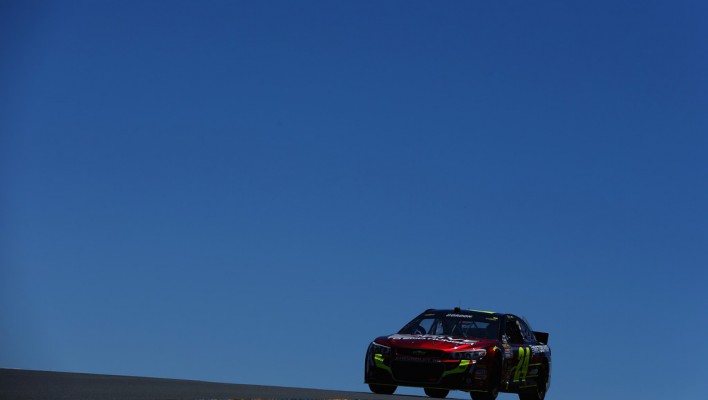 Martin Truex snapped a long winless streak with a victory on the road course in Sonoma, California. Truex used fuel strategy to his advantage to take the lead. In the closing stages he held a comfortable lead over Juan Pablo Montoya and Jeff Gordon en route to the win. Gordon posted a runner-up finish after an early race error when he came to pit road when it was closed. Gordon rallied back to finish 2nd — his best effort of the 2013 season.

Gordon started 10th and dropped to 11th on lap 2 after Juan Pablo Montoya went by at the end of the chute. He dropped to 12th when Tony Stewart passed, but regained two spots after Montoya spun Kyle Busch in turn 11 on lap 3. He moved to 9th with a move around Joey Logano on lap 5 prior to the first caution for Paulie Harraka’s wreck. On the restart, Gordon took 8th from Stewart but fell back to 9th when Montoya passed on lap 11. He regained the 8th spot with a pass on Greg Biffle on lap 21. Gordon came to pit road for tires on lap 24 just as a caution flag waved for rain. However, pit road was closed when Gordon had committed to pit road and received a penalty to start at the end of the line. Gordon came to pit road to top off the fuel and restarted 38th on lap 31. He moved up to 36th prior to the next caution on lap 32 for Alex Kennedy’s crash. Gordon steadily worked through backmarkers and ran 26th on lap 40. His forward march continued as he gained four more spots by lap 46 to run in 22nd place. He re-entered the top-20 on lap 51 with a pass on Ryan Newman and ran 18th at the halfway point.

By lap 60, Gordon had advanced up to 15th place. He had moved to 13th prior to a caution on lap 63 for Danica Patrick’s cut tire. Gordon came to pit road for tires and restarted in 20th place. He gained five spots within a lap of the restart before a caution for Denny Hamlin’s spin on lap 67. Gordon opted to stay on the track and restarted in 4th place on lap 71. He moved to 3rd on the restart prior to a caution for Victor Gonzalez’s crash at the rear of the field. Gordon took the runner-up spot from Dale Earnhardt Jr on lap 78 and closed in on Joey Logano for the race lead. Gordon passed Logano in turn 11 on lap 80 to take the lead. He opened up a two-second lead before Kyle Busch spun into a tire barrier to bring out the caution on lap 82. Gordon came to pit road for fuel and tires and restarted in 18th place — assured he could make it to the finish on fuel. He moved into 15th place within a lap of the restart and took 14th after David Stremme spun on lap 87. Gordon gained three spots in the next three laps and ran 11th on lap 90. He re-entered the top-10 on lap 91 after Jeff Burton and Tony Stewart spun in turn 11.

Gordon took 8th from Jimmie Johnson with 18 laps to go and took 7th from Greg Biffle with 15 to go. One lap later he passed Kevin Harvick for 6th and then took 5th from Marcos Ambrose. After passing Matt Kenseth for 4th he set his sights on Carl Edwards for the 3rd spot. An inside move in turn 11 with 10 laps remaining pushed Gordon up to 3rd place. He took 2nd from Montoya on the final lap after the #42 car ran out of fuel. His runner-up finish was his best effort of the 2013 season.

Turning point
Crew chief Alan Gustafson made the call to take four tires during a caution period on lap 83. The fresher tires allowed him to move from 18th into the top-5 in the closing stages.

JG’s comments
“This is one of those crazy types of races where pit strategy goes all over the place and you never know what might happen. We were on a three-stop strategy and that’s why we wanted to come in when we did. I hate it for Alan because I’m right there and I couldn’t turn away. At the time, I was thinking, ‘Gosh, I don’t know who has it worse right now, me or him?’ Because the way things have been going on the track for me haven’t been great and the way things have been going with the calls haven’t been going his way either. But finally we had a race car that was fantastic. The pit crew and Alan the rest of the day were just spot-on with great adjustments. We had a lot of fun out there. I knew that we could probably never get to the 56 (Truex), but we sure were having a lot of fun coming up through there.” 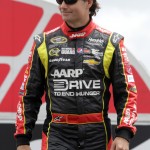 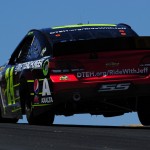 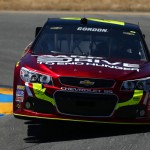 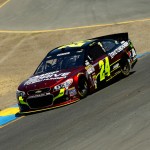 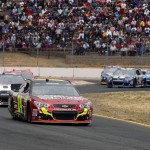 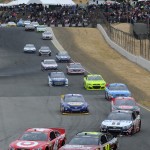 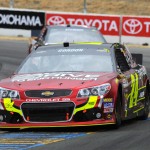 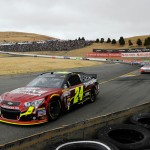 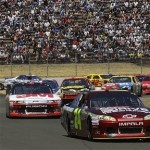 A fuel mileage gamble in the mid-stages of the Save Mart 350 effectively ended Jeff Gordon’s chances for his first road course win since 2006. Gordon was running 3rd when he ran out of gas on the track. By the time the pit stops cycled through, he was back in 15th place. He rallied for a 6th place finish — the first time he’s posted back-to-back top-10’s since October/November 2011.

Gordon started on the outside of the front row and ran 2nd to Marcos Ambrose for the first 11 laps. Gordon took the lead from Ambrose in the esses and pulled away. He led until lap 25 when Clint Bowyer passed. However, during the sequence with the lead, Gordon led the 23,000th lap of his NASCAR career — good enough for 7th on the all-time list. Gordon slipped back to 5th place before a pit stop on lap 35. He cycled through the stops and ran in 6th place. He moved up to 4th by lap 50, but was distantly behind race lead Clint Bowyer due to the lack of caution flags. Gordon took 3rd place from Jimmie Johnson on lap 68.

After crew chief Alan Gustafson elected to keep Gordon on the track for an extra lap during a pit stop sequence, Gordon ran out of fuel on the track. He made it to pit road on lap 73, but fell to 15th in the running order due to the extended time getting to pit road. On lap 80, Gordon moved up to 13th with a pass on Carl Edwards. The first caution waved on lap 82 for Tomy Drissi’s crash. Gordon came to pit road to ensure he could make it to the finish on fuel. He restarted in 14th place and moved to 13th with 20 laps to go. Gordon took 12th from Matt Kenseth with 18 laps to go. Gordon entered the top-10 with 16 laps to go and moved to 8th around AJ Allmendinger with 13 to go. Gordon battled Martin Truex for 6th place before a caution with 4 laps to go. On the green/white/checkered restart, Gordon took 6th from Truex.

Turning point
Gordon was running 3rd when he ran out of fuel on the racetrack. Crew chief Alan Gustafson opted to keep the #24 car on the track for an extra lap to get into a fuel window. He crawled to pit road and dropped out of the top-10, thus ending any chance at a victory. 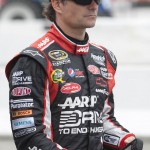 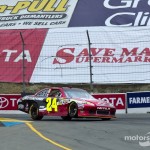 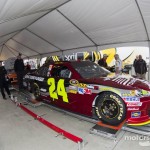