You are here: Home / Archives for Tums Fast Rel 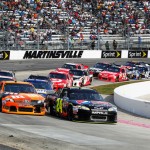 Jimmie Johnson took the lead from Brad Keselowski with 14 laps to go and held off Kyle Busch after a late race restart to score the victory in the Tums 500 at Martinsville Speedway. Johnson’s victory — coupled with Keselowski’s 6th place finish — moved Johnson into the points lead. Jeff Gordon led 91 laps in the race and finished in 7th place.

Gordon started 11th and moved up to 8th by the end of lap 6. He took 7th fron Tony Stewart on lap 11 and entered the top-5 on lap 17. He passed Clint Bowyer and Kyle Busch to take 3rd place on lap 25. Gordon moved into the runner-up spot with a pass on Brian Vickers on lap 33. The first caution waved on lap 46 for David Stremme’s cut tire. Gordon held the 2nd spot thru a round of pit stops, but dropped to 3rd when Kyle Busch went by after the restart. Gordon re-assumed the 2nd position after passing Busch on lap 62. Gordon took the race lead from Jimmie Johnson on lap 68. A caution for David Gilliland’s cut tire slowed the field on lap 98. Gordon dropped to 3rd following a round of pit stops. He moved to 2nd on lap 106 and moved back into the race lead on lap 107. The next caution waved for Travil Kvapil’s spin on lap 127. Gordon stayed on the track and lost the lead to Brian Vickers on lap 147. Denny Hamlin sent Gordon back to 3rd on lap 148. A caution for Kyle Busch’s spin slowed the field on lap 150. Gordon came in for a four-tire change and restarted in 18th place.

Gordon moved through race traffic into the top-10 by lap 174. His forward march continued as he took 7th from Dale Earnhardt Jr on lap 180, and moved around Kurt Busch for 6th on lap 185. He ran 4th when the caution waved on lap 199 for Marcos Ambrose’s spin. Pit stops followed with Gordon exiting in 2nd place. He took the lead from Johnson on the restart. After leading lap 215, Gordon passed Darrell Waltrip for the 6th most laps led in NASCAR history. However, Clint Bowyer and Jimmie Johnson went by on lap 226 and sent Gordon back to 3rd place. He regrouped and took 2nd from Johnson just before the halfway mark. Kasey Kahne took 2nd from Gordon on lap 318 and Hamlin sent him to 4th on lap 324. Brian Vickers passed on lap 326 to push Gordon back to 5th, and Johnson sent him to 6th on lap 331. He fell to 7th when Kyle Busch went by. Gordon came to pit road on lap 337 for a green flag pit stop. Gordon ran 4th following the pit stop cycle. He moved to 3rd on lap 373 when Hamlin slowed on the track.

Johnson and Busch sent Gordon back to 5th on lap 391 prior to a caution for Hamlin whose car (and Chase hopes) died on the track. Gordon came to pit road for tires and restarted in 5th. He moved around Kahne to take 4th with 100 laps to go. He took 3rd from Busch with 83 to go and set his sights on Johnson and Bowyer at the front of the field. Gordon took 2nd from Bowyer with 70 to go. A caution for Juan Pablo Montoya’s spin after contact with Johnson slowed the field with 62 to go. Gordon ran 2nd to Johnson before a caution for Kevin Harvick’s engine with 25 laps to go. Brad Keselowski and Earnhardt Jr stayed on the track during the caution. Johnson and Gordon restarted 3rd and 4th with 19 to go. On the restart, Gordon dropped to 6th on the outside line before regrouping to take 5th from Earnhardt Jr with 16 to go. He took 4th from Keselowski with 12 to go. Two laps later, the caution waved for Earnhardt Jr’s spin in turn 2 after contact from Carl Edwards. On the restart, Gordon faded on the outside line. He dropped to 5th with 5 to go in a door-banging duel with Bowyer and lost 6th place on the final lap to Keselowski. The 7th place finish was Gordon’s 8th top-10 in the last 10 races. However, he trails points leader Johnson by 54 points with just 3 races to go.

Turning point
Gordon seemed to be tracking down Johnson for the race lead in the closing stages when a caution with 25 laps to go bunched the field. Gordon was unable to get close to the lead after that.

JG’s comments
“It was strong, especially the first half — that meant a lot to me and this team. This team made an amazing effort. The pit stops were great and the car was dominant. I think we wore the left rear tire out or something on the long run. But the last thing we wanted was to be on the outside of those last two restarts. We were and it cost us.” 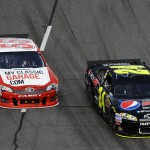 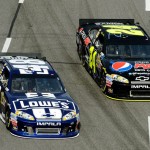 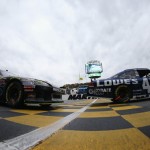 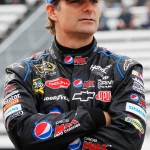 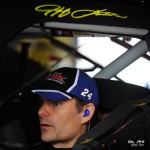 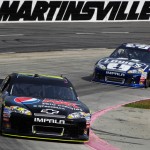 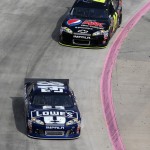 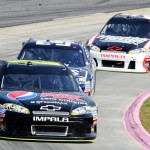