You are here: Home / Feature / Sonoma In Car Audio

June 21 – – Kasey Kahne held off Tony Stewart on a series of late race restarts to win his first career road course race in the Save Mart 350 at Infineon Raceway. Jeff Gordon’s prospects were hindered by a pit road speeding penalty that put him back in 32nd place. He rallied back with a strong effort in the final 20 laps as he gained 15 spots during the closing stages. A green/white/checkered flag finish allowed Gordon to move up from 13th to 9th at the checkered flag. 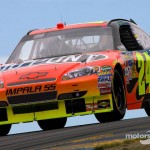 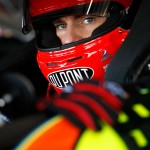 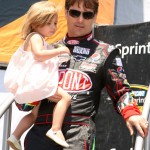 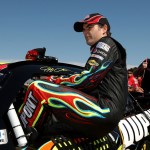 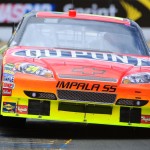 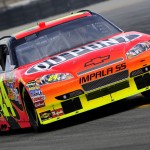 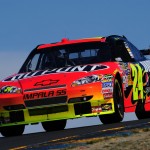 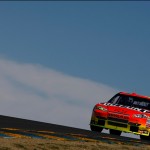 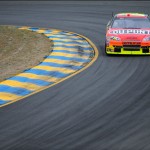 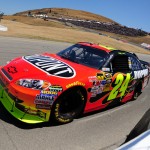 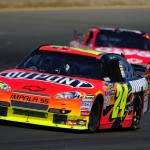 “The DuPont Chevrolet just wasn’t as fast as we really needed to be all weekend. We made some changes for the race. I don’t think that made it any better. So he (Jeff Gordon) battled real good. We pitted one time we probably shouldn’t have. We worked the first caution really well. We got a little track position and then we had kind of a poor pit stop, and got caught speeding all at the same time and had to go to the back. But the guys kept their heads up and we raced all the way and that’s what you’ve got to do at all these races. So to come home with a top 10 was really impressive.”

DOUBLE FILE RESTARTS ON A ROAD COURSE, DID THEY WORK TODAY?

“It looked like it was a good race, so yeah. The question is, what is work? So I thought it was great. There were some passes and there was some excitement. Some guys were probably disappointed that they lost track position, but it gave us an opportunity. We started 33rd there with about 30 or 35 (laps) to go and we got all the way up to ninth. So I’m a big fan of it at the moment.”

DID JEFF GORDON SAY ANYTHING ABOUT HIS BACK? HE MENTIONED IT MIGHT BE A CONCERN ON A ROAD COURSE

“He didn’t say anything to me. I just saw him and he looked fine to me. I think his back is a whole lot better than the car we gave him.”