You are here: Home / Feature / New Hampshire – In Car Audio

June 29 – – Although Jeff Gordon didn’t come away with a victory in the rain-shortened Lenox 301 at New Hampshire Motor Speedway, a strong 2nd place effort showed that Gordon had made significant improvement on the flat tracks. Since New Hampshire is the first race in the ‘chase for the championship,’ the strong effort in June should pay dividends in mid-September.

Gordon started on the outside of the front row and immediately jumped into the lead. However, he lost the top spot to Kurt Busch on lap 7. A caution for Patrick Carpentier’s brush with the wall slowed the field on lap 15. Gordon, and most of the top-10, elected to stay on the track. On the restart, he powered ahead of Busch on the outside line to take the lead. Jamie McMurray’s wreck on lap 22 slowed the field. Gordon chose the inside line for the restart and jumped to the outside to hold onto the lead heading into the first turn. Once again, the green flag run was short-lived as A.J. Allmendinger’s spin brought the caution out on lap 28. On the next restart, Busch jumped to the lead on the outside line.

A competition caution on lap 45 brought the field to pit road. Gordon departed pit road with the lead. He chose the outside line for the restart, and subsequently lost the lead to Jimmie Johnson.

Gordon settled in behind Johnson until green flag pit stops on lap 124. Gordon trailed his Hendrick Motorsports teammate by about one second on the track. A debris caution on lap 155 brought the field to pit road. Gordon opted for two tires and exited pit road with the lead. Gordon took the outside line on the restart and held onto the lead. The caution waved on lap 172 after Paul Menard hit the wall. Gordon once again chose the outside line for the restart. Gordon got a jump on the restart, which allowed him to stay in front of the day’s major incident. Martin Truex was turned sideways by Kyle Busch on the fronstretch while coming up to speed. Truex spun toward the outside wall and collected Casey Mears, Kevin Harvick, Jeff Burton, David Ragan, and Brian Vickers. The race was red-flagged for track clean-up.

Gordon got the jump on the restart on lap 180, but the field only ran three laps before a caution for Joey Logano’s cut tire. Gordon raced to the lead on the restart and battled side-by-side with Tony Stewart for a few laps before Scott Speed’s spin brought out the caution flag on lap 190. On the restart, Stewart battled alongside Gordon and took the lead on the backstretch. Gordon ran 2nd to Stewart before green flag pit stops on lap 235. Gordon beat Stewart off pit road and was in position to take the race lead once the stops cycled through the field. However, with rain showers on the horizon, Ryan Newman and Joey Logano stayed on the track in an effort to win a rain-shortened race. Gordon’s fresh tires cut Newman’s 15 second lead in half with 40 laps to go. Newman came to pit road with 38 laps to go after running out of fuel. Joey Logano inherited the lead as steady rain began falling, thus necessitating a caution flag. Gordon held off Busch for the runner-up position just before the caution flag. The race was red flagged with 27 laps to go. The victory was Logano’s first in the Cup series. 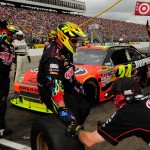 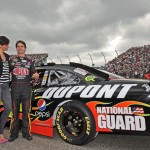 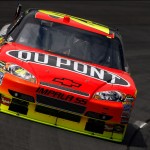 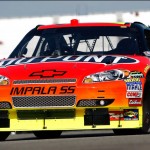 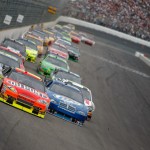 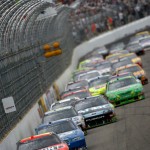 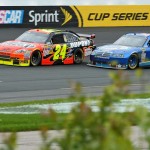 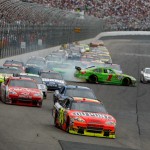 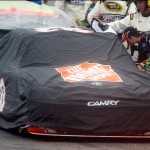 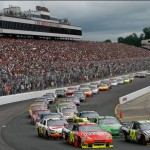