July 5 – – Jeff Gordon struggled to a 28th place finish with a damaged car in the Coke Zero 400 at Daytona International Speedway.  Gordon battled handling problems for the first half of the race before getting swept up in a wreck on lap 77.  He went on to finish as the last car on the lead lap in a race that saw a dramatic last lap battle between Tony Stewart and Kyle Busch.  As  Busch attempted to block Stewart, he found himself on the receiving end of a tap.  Stewart went by to claim the victory, while Busch’s car was wrecked beyond recognition.

Jeff led the first lap of the Coke Zero 400 at Daytona International Speedway.  That’s the good news.  The bad news is that was the only lap he led, and the only time he was in contention.  Hung out on lap 2 by aggressive moves on the part of Denny Hamlin and Kurt Busch, Gordon was shuffled quickly to the back of the main pack.  He was able to move back up to 8th position in the first quarter of the race, but a loose race car caused him to drift back to the mid-twenties, and on lap 77, he was caught up in a seven-car wreck that started many places ahead of him.  The car was badly damaged on the right front, but heroic efforts by the Dupont crew kept him on the lead lap, even though the car was damaged and he had intermittent radio problems.  A caution at lap 103 allowed the team to repair the splitter and correct handling issues and he restarted 26th, still on the lead lap.  Gordon chose to hold his wounded car at the rear of the pack, saying “we’ve got a better chance to drive through the big one than to be in it.”  Another caution at lap 152 allowed Gordon to pick up a few more spots, but a bad restart left Gordon last on the lead lap.  Kyle Busch’s violent wreck on the final lap left Tony Stewart in Victory Lane and Gordon 28th, last car on the lead lap. 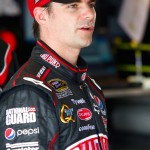 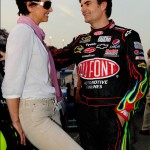 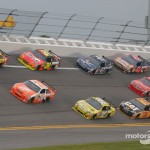 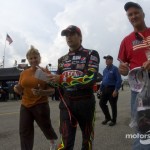 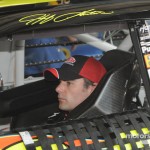