You are here: Home / Feature / Jeff Gordon at the White House

August 19 – – Before heading to Bristol Motor Speedway for the weekend’s race, Jeff Gordon attended a NASCAR event hosted by President Obama at The White House in Washington, D.C. Gordon was cited during the President’s speech on the south lawn for his charity work.  “Jeff Gordon put it best when he said,  ‘Any person out there should do something some way to give back to their community,'” said President Obama during his remarks.
source: gordonline.com 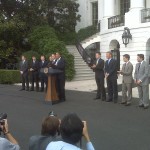 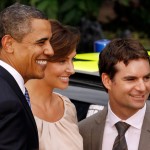