February 15 – – It was a long day into night at Daytona International Speedway as an asphalt problem in turn two delayed the Daytona 500 into a night finish.  For Jamie McMurray, it turned out to be his finest moment as a NASCAR driver, while Jeff Gordon struggled late in the event with traffic and crashed on the final lap.

Gordon started in the rear of the field and moved up to 33rd by lap 5.  On lap 8, he dove onto the track apron to avoid a multiple car crash triggered by Brad Keselowski’s spin in turn two.  Gordon pitted for tires and restarted in 31st on lap 13.    He worked the draft and moved up with Kyle Busch to 23rd on lap 30. Five laps later, he lost Busch in the draft, but moved to 21st position.  Gordon entered the top-20 on lap 40 as a green flag pit stop sequence began.  He came to pit road for tires and fuel on lap 50.

Gordon rode in 20th for the next 15 laps as the field strung out in a single-file line.  Joe Nemechek’s spin on lap 67 brought the caution, and the field came to pit road.  Gordon exited pit road in 15th place and restarted there on lap 70.  However, he fell to 19th and moved up to the high line on lap 74.  Mike Bliss’ spin on lap 78 brought the caution out and the field returned to pit road for tires.  Gordon changed two tires and restarted in 5th on lap 82.  He drafted with Martin Truex and moved into 3rd on lap 88 behind Greg Biffle and Kyle Busch.  Clint Bowyer gave Gordon a drafting push, and Gordon moved to the outside to try for the race lead.   However, Busch moved up in line and took the race lead with help from Gordon. Bowyer gave Gordon drafting help to take the race lead on lap 98. Gordon led the race at the halfway point, before Bowyer passed on lap 101.  Gordon settled into the low line behind Kevin Harvick in 3rd place.  Gordon made a bid for the lead and got shuffled back to 5th place on lap 108.  He fell to 9th on lap 111 before John Andretti’s cut tire resulted in a caution flag on lap 117.  Gordon changed four tires and departed in 11th place.   The race was red flagged for nearly two hours after a chunk of asphalt needed replacement in turn two.

When the race restarted, the sun was setting in the western sky and the track temperature was noticeably cooler.  Gordon hung to the low line and moved up to 7th with 73 to go.   Gordon stayed behind Truex in the draft and moved up to 5th with 63 laps to go. Five laps later, AJ Allmendinger got loose underneath Gordon exiting turn two.  Allmendinger spun toward the inside of the track, barely avoiding the left rear of Gordon’s car.   Pit stops followed with Gordon exiting pit road in 5th place.  On the restart, Gordon hooked up in a tight draft with Elliott Sadler on the high line. With 52 to go, Gordon pushed Sadler alongside Truex for the race lead.  Two laps later, he bumped Sadler aside to take 3rd place.  Gordon tried to move to the middle line with 48 laps remaining, but got hung out in the draft.  He slipped back to 16th place before hooking up in a draft with Mark Martin and moving up to 12th.  A caution at the 400-mile mark was for a problem with the asphalt patch in turn two.  The race was red-flagged once again with drivers exiting their cars for an extended period.

The drivers returned to their cars at 6:30pm/eastern time for a finish under the lights.  The lead lap cars came to pit road with Gordon opting for two tires and departing in 4th place.  He restarted in 5th with 32 laps to go because Scott Speed did not pit.  With 16 laps to go, Gordon worked his way around Speed on the inside line but had no drafting help.  He fell to 8th before getting in line behind Jamie McMurray.  He dropped to 10th on the high line behind Truex with 12 laps to go.  Five laps later, Ryan Newman, Travis Kvapil, and Elliott Sadler crashed on the backstretch to bring out the caution.  Gordon came to pit road for two tires and restarted in 13th place with 3 laps to go.  On the restart, Bill Elliott crashed in turn three to bring out the caution and set up a green/white/checkered flag finish.  Gordon lined up 15th for the GWC restart.   Kasey Kahne wrecked coming off turn two (no mercy!) on the first GWC attempt as Kevin Harvick pushed his way through Greg Biffle and Martin Truex to take the race lead.

On the second GWC restart, Harvick got a push from Carl Edwards to take the racfe lead. However, the outside line zoomed by as Biffle pushed McMurray into the lead.  McMurray held off a furious charge by Dale Earnhardt Jr to take the victory.  Gordon wrecked in turn three on the final lap due to Denny Hamlin’s front bumper and finished the event in 26th place. 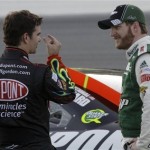 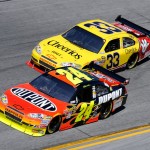 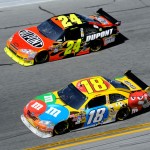 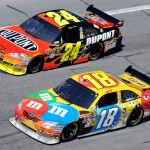 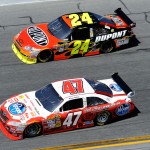 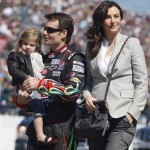 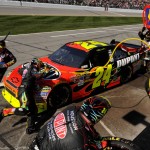