You are here: Home / Feature / Las Vegas In Car Audio

February 28 – – Jeff Gordon led 218 of the 267 laps of the Shelby American at Las Vegas Motor Speedway, but a late two-tire change cost him as Jimmie Johnson tracked him down and passed with 17 laps to go. Johnson claimed his second consecutive win.

Gordon started on the inside of the front row due to polesitter Kurt Busch opting for the outside. Gordon passed Busch for the lead exiting turn four and picked up the 5-point bonus for leading a lap. The first caution waved on lap 2 for an incident involving Kevin Conway. Gordon chose the outside line for the restart on lap 6 and pulled away from Busch. His lead ballooned to nearly 3 seconds on lap 25, and 7 seconds on lap 40. A caution for Mike Bliss’ crash on lap 46 erased Gordon’s lead and brought the lead lap cars to pit road. Gordon held onto the lead through the round of pit stops.

Gordon opted for the outside on the restart and dropped to 2nd before a track issue forced a caution within one lap. He started on the outside of Greg Biffle on lap 57 and assumed the lead. He led until a caution on lap 85 for Sam Hornish’s spin. Gordon lost two spots on pit road and restarted in 3rd on lap 90. Shortly after the restart, Juan Pablo Montoya and Jamie McMurray crashed in turn three as Gordon moved to the runner-up position. On the restart, Gordon made a bid for the lead on the outside of Matt Kenseth and re-assumed the top spot on lap 100. Another track issue brought the caution out and the leaders to pit road. Gordon blundered by overshooting his stall and had to back-up on a fuel only stop. He exited pit road in the 3rd position. However, Gordon redeemed himself on the restart by regaining the lead on lap 114. After clinching the bonus for leading the most laps, Gordon came to pit road for a green flag stop with 106 laps to go and cycled through the sequence as the leader.

Gordon remained in the lead and came to pits for a green flag stops with 54 laps to go. Gordon’s lead was erased with 36 laps to go when Kevin Conway hit the turn two wall. The leaders came to pit road and Gordon opted for two tires. He departed with the lead, but was tracked down and passed by Jimmie Johnson with 17 laps to go. Kevin Harvick passed with 4 laps to go to put Gordon back in 3rd. Johnson pulled away to win his second straight race and 49th of his career. Gordon finished 3rd and moved up to 13th in the points standings — a gain of 9 positions. “Had more guys taken two tires, I think we could have got them,” Gordon said. “That’s what makes leading so tough sometimes. We fought them off as long as we could. We were awesome all day, the pit stops were awesome. I know Steve Letarte is beating himself up over the two-tires, but if some other guys took two…” 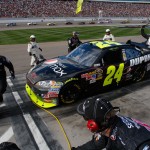 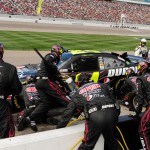 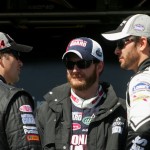 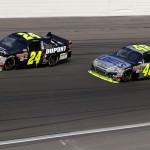 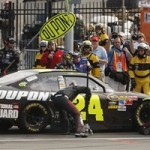 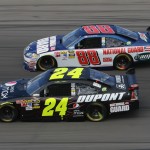 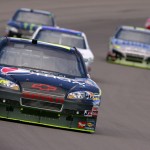 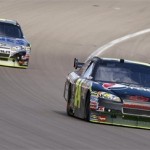 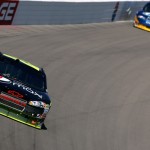 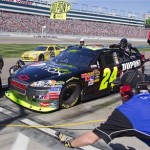 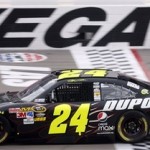