March 22 – – Jeff Gordon’s day at Bristol Motor Speedway was an up and down affair characterized by handling issues in the mid-stages and a wreck with 150 laps to go.  Gordon’s unsatisfying 14th place finish leaves him 11th in points for the second straight week.  Jimmie Johnson took the lead from Tony Stewart with 7 laps to go and won his 50th career race.

Gordon qualified 5th, but started 3rd after Dave Blaney dropped to the rear of the field.  He settled into 4th after Jimmie Johnson used the high line to take the spot and eventually the race lead.  Gordon used the upper groove to take 3rd from polesitter Joey Logano on lap 8.  The first caution waved on lap 41 after Blaney stopped on the track.  The field came to pit road with Gordon exiting in 4th place.  He restarted in 6th after David Stremme and Brad Keselowski stayed out.  Gordon made quick work of Stremme on the outside line and got around Kurt Busch.  He took 2nd place from Keselowski on lap 49 and closed in on Johnson for the race lead.  The next caution waved for Clint Bowyer’s engine problem on lap 57.  Gordon held off Kurt Busch on the restart, but eventually ceded the runner-up spot on lap 81.  He fell to 6th by lap 115 while battling a tight handling condition.  A caution for Denny Hamlin’s wall contact on lap 117 brought the leaders to pit road.   Gordon departed in 5th place after gaining a spot.

Light rain enveloped the track on lap 125, which brought another caution period.  After nearly 20 minutes circling at reduced speed, the green flag waved.  Gordon dropped to 6th after Mark Martin passed on lap 150.  Keselowski went around Gordon on lap 164, and Jamie McMurray passed four laps later.  Gordon slipped to 10th on lap 170 after Martin Truex and Marcos Ambrose went by.  He fell out of the top-10 on lap 175 when Paul Menard moved around the DuPont Chevrolet.  The slide through the field continued as Gordon ran 17th on lap 195.   Gordon was back in 21st position when Kasey Kahne brought out a much needed caution on lap 205.  On the restart, Gordon moved from 21st to 17th by lap 220, and advanced to 14th on lap 230.  At the halfway point, Gordon had moved up to 12th as the tight handling condition he experienced earlier seems much improved.  Following a caution flag sequence for Kyle Busch’s cut tire, Gordon gained two positions on pit road.  With 200 laps to go, Gordon was running 9th behind Tony Stewart.  A caution for Regan Smith’s wall contact resulted in a caution flag.  Gordon left pit road in 10th place on lap 324.

On lap 341, Mark Martin slammed the wall off turn two after contact with Greg Biffle.  Martin then brought his car back into race traffic and made contact with the front of Gordon’s car, who was slammed in the rear by Marcos Ambrose.  Gordon elected to stay on the track running 11th due to rain in the area.  When the skies lightened, Gordon came to pit road for tires with 143 laps to go.  He restarted in 24th place before a caution flag for rain.  While the lead lap cars pitted, Gordon stayed on the track and moved to 2nd place.  The green flag waved with 90 to go and Gordon was unable to hold the inside line.  He dropped to 4th within a lap of the restart as Kurt Busch and Jimmie Johnson went by.  Less than 25 laps later, he slipped back to 10th place.  Gordon dropped out of the top-10 when Kyle Busch passed with to go.   He was running 14th when the caution waved for debris with 17 laps to go. He exited pit road in 16th for the final run to the finish.  Gordon moved up 2 spots to finish 14th.  At the front of the field, Johnson restarted 6th and moved to the lead around Tony Stewart with 7 laps to go.  Johnson pulled away to win his 50th career race and first ever at Bristol. 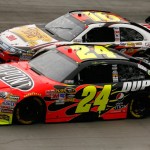 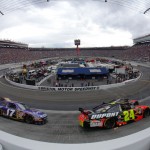 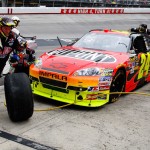 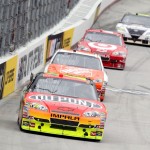 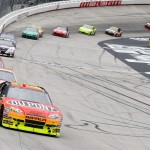 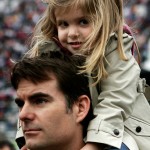 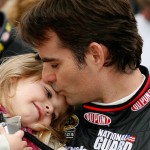