March 29 – – If nothing else, Jeff Gordon is Mr. Consistency at Martinsville Speedway.  Gordon posted a 3rd place finish in the rain-delayed Goody’s 500 for his 11th straight top-five and 15th straight top-ten finish at the 1/2-mile track.  However, the ending of the Goody’s 500 was a disappointment as Gordon lost the race lead on a final green/white/checkered restart after Matt Kenseth drilled him from behind.  Gordon regrouped and knocked Kenseth up the track in turn three, but not before Denny Hamlin took the race lead and the victory.  “I didn’t get a great restart,” Gordon said.  “I saw (Kenseth) behind me.  He drove in the back of me so hard.  I made sure he wasn’t going to win the race after that.”

Gordon started 11th and gained five spots in the opening 10 laps.  He passed Jimmie Johnson and lap 25 to move into 6th, and entered the top-5 on lap 30.  He gained a spot during a pit stop sequence on lap 40, and quickly moved into the runner-up spot on lap 49.  Gordon tracked down and passed Jeff Burton for the race lead on lap 59.  He held the lead until Kurt Busch took the top spot on lap 140.  He dropped two spots on a pit stop sequence on lap 164 and slipped further back by lap 190 while battling handling issues in the corner.  However, the car eventually came to him and he moved back into the top-10 on lap 193.  Gordon’s forward charge continued as he took 7th from Dale Earnhardt Jr on lap 204.  At the halfway point Gordon was running in 6th.  He remained there until lap 303 when Joey Logano took the position.  His forward charge commenced on lap 314 after a pit stop.  He passed Clint Bowyer and Jimmie Johnson to re-enter the top-five, and then took 4th from Kyle Busch on lap 328.

Gordon struggled on restarts for most of the race and following a caution flag on lap 364, he dropped to 7th.  He regouped to take 6th on lap 390 before another caution on lap 421.  Pit stops followed and Gordon exited in 9th place.  With 70 laps to go, he moved into 7th place, and then took 6th from Martin Truex Jr.  He passed Matt Kenseth for 5th with 50 to go, and passed Clint Bowyer for 4th with 18 to go.  With 9 laps to go, Jeff Burton cut a tire and hit the wall, which allowed Gordon to move up to 3rd place.  Denny Hamlin and Kyle Busch both elected to come to pit road under caution, which gave Gordon the race lead.  On the restart, he pulled away from Ryan Newman and looked to be on the way to his 83rd career victory.  However, Kyle Busch’s spin in turn four with 2 laps to go brought the caution flag.  Gordon was angered by the timing of the flag as he was less than 90 feet from taking the white flag — which would have automatically frozen the field and ended the event.

On the green/white/checkered restart, Kenseth slammed the rear of Gordon’s car and knocked him up the track in turn 1.  He raced side-by-side with Kenseth on the backstretch and clipped the rear of Kenseth’s Ford to send him up the track and make sure the Wisconsinite did not visit victory lane.  Hamlin dove low to take the race lead and the victory with his teammate Joey Logano in tow.  Gordon regrouped to hold off Ryan Newman to finish 3rd.  The finish allowed Gordon to move up to 7th in the series points standings. 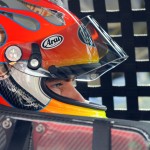 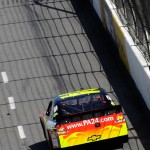 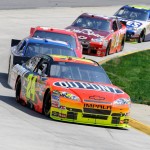 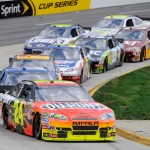 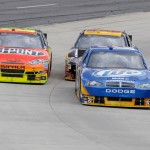 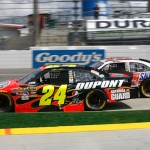 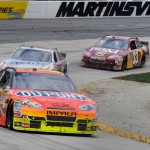 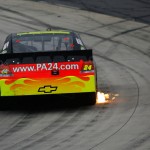 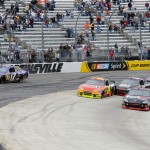