You are here: Home / Feature / Michigan In Car Audio

June 14 – – Jeff Gordon turned in his usual solid performance at Michigan Speedway, but once again it wasn’t enough to procure a victory. Gordon finished 4th but did not lead a lap in a race dominated by Denny Hamlin, which produced another victory for Joe Gibbs Racing as they wrestle for supremecy in the sport with Hendrick Motorsports.

Gordon started 6th and dropped two spots in the opening laps. He regained his starting position by the first caution flag on lap 18. Shortly after the restart he reported a loose handling condition and slipped back to 10th in the running order. A pit stop on lap 48 allowed crew chief Steve Letarte to make adjustments. Gordon moved to 6th on lap 53 and entered the top-5 on lap 63. A two-tire pit stop under caution on lap 98 moved him up to 3rd, before he lost a spot at the halfway point.

Gordon held the 4th position for the long green flag run, through a round of pit stops on lap 142. He remained distantly in 4th for the balance of the next run while trailing race leader Denny Hamlin by more than 10 seconds. Green flag stops came on laps 176-177 with Gordon holding the 4th spot. A debris caution on lap 182 removed Hamlin’s comfortable margin over the field. Gordon opted to stay out, thus putting a premium on track position over fresh tires. Gordon briefly moved to 3rd after the restart, before falling to 4th with 11 laps to go. 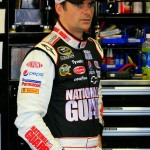 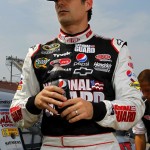 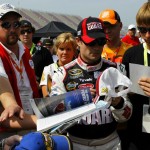 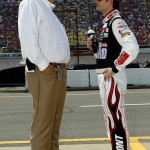 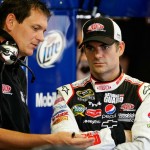 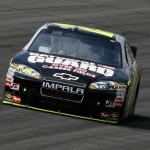 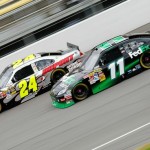 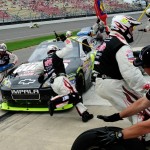 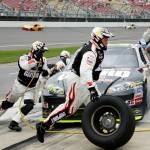