Jeff Gordon’s chances for the NASCAR Chase now come down to a victory at either Bristol, Atlanta, or Richmond — while a handful of other drivers remain on a single win in 2012. A valve spring problem relegated Gordon to a 28th place finish at Michigan Speedway. After 10 consecutive top-20 finishes from Charlotte in May to Pocono in August, Gordon has now posted back-to-back sub-20th place efforts.

Gordon started 9th and dropped to 13th by the end of the first lap. His slide continued as he fell to 16th on lap 5 while battling a loose handling condition. The first caution waved on lap 6 for David Gilliland’s spin. As the tire wore in, Gordon moved to 12th on lap 15. He entered the top-10 on lap 22 with a pass on Ryan Newman. Gordon came to pit road for a green flag pit stop on lap 36. He held the 10th position until Jimmie Johnson went by on lap 64. One lap later, the race leader Mark Martin was eliminated in a crash that started when Bobby Labonte spun off turn four. Both Martin and Kasey Kahne spun toward the infield, with Martin making hard contact with the pit wall. Gordon came to pit road in 9th and departed in 11th place after taking four tires. Gordon dropped to 15th before the next caution on lap 77 when Marcos Ambrose hit Regan Smith in turn 4. The next caution waved for Joey Logano’s wall contact on lap 89 with Gordon holding the 15th position.

Gordon came to pit road and restarted in 25th position. However, he dropped off the pace on lap 94 due to an engine issue. He pulled the #24 car into the garage on lap 98 with a valve spring problem. He returned to the race on lap 135 while running on 7 cylinders and finished 28th.

After two races and two test sessions at Michigan in 2012, Gordon’s best moment in the state this year might have been the meeting with Nena at the Jackson County Airport.

Turning point
Just before the halfway point, Gordon dropped off the pace with a valve spring problem. It was his first engine issue since the season-opening Daytona 500.

JG’s comments
“It was a valve spring, just running along there and all of a sudden dropped a cylinder. I was pretty sure that’s what it was. Of course the #14 had that same issue got our fingers crossed for all the other Hendrick engines out there. This is a tough place on engines. We rarely have these issues and it’s unfortunate to have this one here today. It’s the kind of year we have been having. I was hoping after Pocono we could carry some momentum and not have these kinds of back-to-back weekends, but that’s not the case. We go on to Bristol and fight hard there.”

WHAT HAVE YOU BEEN ABLE TO DIAGNOSE ON THE MOTOR? “It’s something that when you come to Michigan and you turn these kinds of sustained rpm’s on this fast of a track, it’s always of concern here. And that bit us. We’ve been having a rough weekend. We’re not handling the way we were hoping to. Track position is so important that all we had to do was get track position and we still could have come out of here with a good finish and even won the race. There’s a lot of laps left and it’s unfortunate we don’t get to find out what we could do with it. It’s the kind of year we’ve been having. We’ll just go on to Bristol.”

IT SOUNDED LIKE YOU HAD SOME ISSUES WITH DALE EARNHARDT JR. EARLIER IN THE RACE
“WWell he took me four-wide and that wasn’t that big of a deal but then he slid up in front of me off of Turn 2 and I had to check up or I would have wrecked all of us. So, I just didn’t think that it was the smartest thing to do, especially as teammates. But, he chose to do it and that’s fine. It all worked out. I don’t care who I’m racing out there; I’m going to show my displeasure if I’m not happy about something. But that one was pretty close; but no big deal. I’m glad to see he’s running good. Those guys have really got their car dialed-in here at Michigan this year.” 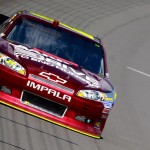 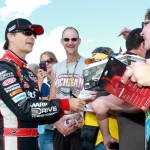 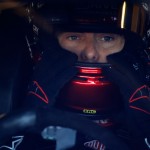 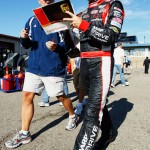 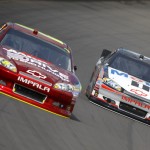 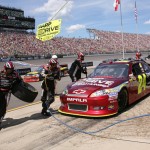